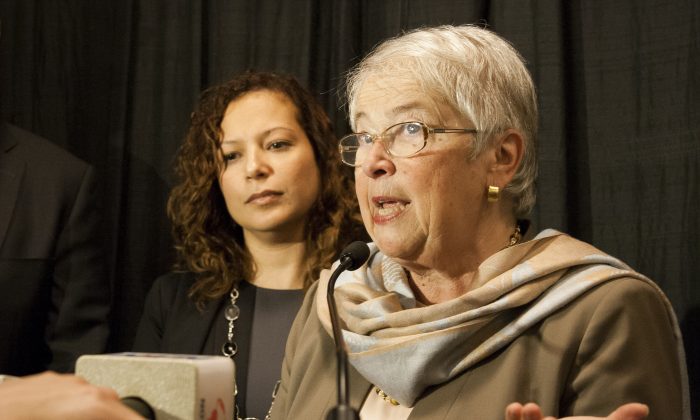 NEW YORK—Six-year-old Daniel Zheng took the stage Monday to tout his bilingual school that teaches both English and Chinese as his mother beamed in the audience.

Half of Shuang Wen’s classes are conducted in English and the other half in Chinese for grades kindergarten to fourth.

The principal, Iris Chiu, emphasized the school’s difference from the usual English-as-a-second-language classes at other New York City public schools.

“We’re not teaching it as a foreign language,” said Chiu.

She cited many past education studies that said English language learners (ELL) don’t absorb well core subjects taught primarily in English. Such students haven’t been performing as well as native speakers in standardized testing, for instance, on the New York State Regents.

“Because when children emigrate from other countries, they’ve already learned a lot of the basics—in their mother tongues,” explained Chiu.

The approach practiced in Shuang Wen and other bilingual schools is more of what New York City Chancellor Carmen Fariña wants to see.

Fariña and other school officials announced a new memorandum Monday to enhance the ELL experience in New York public schools.

She explained, “For me, this is not about an agreement to fill seats or to fill a legal requirement. This is something to give our kids hope, in college and beyond.”

Fariña recalled her teaching days in a Hispanic neighborhood where she was one of the only teachers who spoke Spanish.

The need for teachers to learn more languages was apparent to her from early on.

More bilingual programs will be created under the memo, to be implemented for the 2015–2016 school year.

The memorandum includes clauses requesting more schools to let ELL students in, and that each high school meets a quota of such students.

Orientations should be conducted in families’ mother tongues.

Another goal of the memo is for schools to use 25 percent fewer ESL teachers who lack appropriate certification by June 2016. Instead, qualified bilingual professionals should serve students.

Fariña said, “We should recognize that having two languages or three is an asset for our society. It’s not a deficit.”

Chiu thinks that her students will one day reap the benefits of being bilingual.

“In the global economy, they’ll have a stronger competitive edge,” she said.

She foresees a new generation of savvy entrepreneurs.

“Because not only can they speak the languages, but they can also read agreements and negotiate terms with businessmen.”