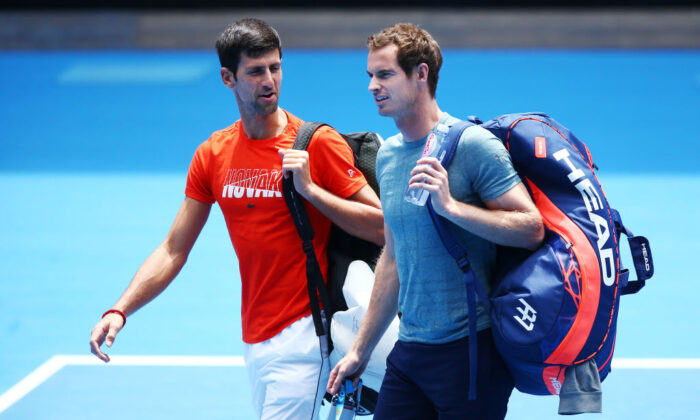 Novak Djokovic of Serbia talks with Andy Murray of Great Britain before their practice match ahead of the 2019 Australian Open at Melbourne Park, Australia, on Jan. 10, 2019. (Michael Dodge/Getty Images)
Australia

‘Not Good for Tennis at All’: Andy Murray Expresses Concerns Over Novak Djokovic Deportation Case

Andy Murray has voiced his concern for Novak Djokovic and stated that the predicament which has engulfed world No. 1 is “really bad” for tennis.

Djokovic visa has been reinstated by a federal court judge who had said that the “decision to proceed with the interview and cancel that visa … was unreasonable,” after an agreement was reached by Djokovic’s lawyers and lawyers for Home Affairs Minister Karen Andrews.

“I think everyone is shocked by it, to be honest,” Murray told reporters.

“I’m going to say two things on it just now. The first thing is that I hope that Novak is okay. I know him well, and I’ve always had a good relationship with him.

The 34-year-old British tennis player and five-time Australian Open runner-up said he had not personally spoken to Djokovic, but the Association of Tennis Professionals (ATP) had tried to stay in touch with him.

Murray, who previously said Djokovic should “listen to the experts” on the subject of COVID-19 vaccination, stated he could not comment further on his Serbian rival’s circumstances as “some of it is speculation.”

“What I would like to do right now is just wait for all of the facts to come out about what’s happened because every day something new is coming out, and we’re hearing new information all of the time,” he added.

“Some stuff has come out that really doesn’t look good, either. I want to hear all the facts first before giving all of my thoughts on it.”

Murray’s sentiment has been echoed by Nick Kyrgios, Australia’s most high-profile men’s player, who said in a post on Twitter: “I’m feeling for him now. Like it’s not really humane, is it, what’s going on?”

He said while he had got vaccinated, the handling of Djokovic’s situation is “really bad.”

“Like these memes, headlines, this is one of our great champions, but at the end of the day, he is human. Do better,” he tweeted on Friday.

However, former world No. 1 Rafael Nadal stressed that the most straightforward way to secure a spot in the Australian Open was to get vaccinated and that Djokovic had to cope with the consequences of his decision not to be jabbed.

“I think if he wanted, he would be playing here in Australia without a problem,”  he said on Thursday.

“Of course, I don’t like the situation that is happening. In some way, I feel sorry for him. But at the same time, he knew the conditions since a lot of months ago, so he makes his own decision.”