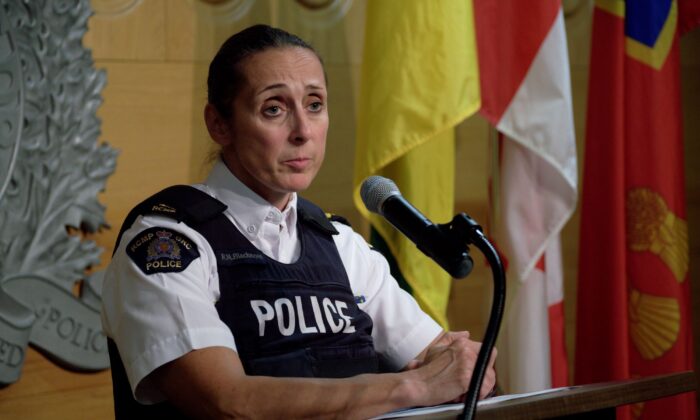 The head of the Saskatchewan RCMP is defending the limited information she provided about the in-custody death of a suspect in a series of stabbings earlier this month on the James Smith Cree Nation and in the nearby village of Weldon.

Assistant Commissioner Rhonda Blackmore says it is a complex investigation, not a TV drama where police will have all of the answers by the end of the episode.

She says it is important RCMP wait for an independent investigation to be completed before making assumptions on how Myles Sanderson’s died, and that any speculation could undermine that investigation.

Blackmore says the police who arrested Sanderson are trained experts in their field, but are not medical experts or pathologists.

Police have said Sanderson, who was 32, died in police custody on Sept. 7 after going into medical distress shortly after his arrest, but a cause of death has yet to be released.

Sanderson and his brother Damien Sanderson, who was found dead near one the crime scenes, were wanted for the killings of 10 people and for injuring 18 others during the attacks on Sept. 4.

An independent investigation has since begun into the death of Myles Sanderson by the Saskatoon Police Service and the Saskatchewan Serious Incident Response Team.

“Independent oversight of police actions is critical to public trust and confidence in the actions of police officers. This is exactly the reason why I was limited in what I could say when I spoke with the media on Sept. 7,” Blackmore said Thursday in a statement.

“I am confident both investigating bodies understand the public interest in this case and will be working to release information as soon as they are able.”