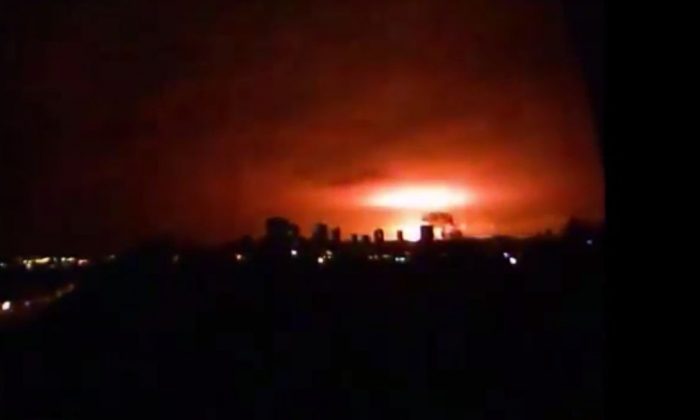 The gigantic blast that rocked Donetsk, Ukraine, apparently was at a chemical plant. Videos showing the gigantic explosion were being shared on social media websites and Internet forums, with some claiming it was small, “tactical nuke.”

“This was caused by a dropped cigarette butt,” the Ukraine army’s Anti-Terrorist Operation spokesman, Andrey Lysenko, said, according to Russian state broadcaster RT.com. “Accidents often happen in factories where no one is responsible for fire safety. Well, it’s chaos, and they are barbarians.”

According to RT, the chemical plant is being controlled by the rebel People’s Donetsk Army. The blast took place after 10 p.m. local time.

“The center of the blast was near DKZHI,” co-chairman of the anti-Kiev People’s Front Konstantin Dolgov said on Facebook page, via RT.

The plant is said to produce chemical materials for explosions, artillery bombs, and ammunition. The factory has been targeted before, as it was hammered with artillery rockets in November and September of last year.

“The fire has been contained. There is not threat of chemical spill… Most likely it was a high-caliber artillery shell,” an official from the Donetsk People’s Republic told the broadcaster.

However, a satirical news website, the Internet Chronicle, posted a fake story saying the blast was triggered by a nuclear bomb. This doesn’t have a shred of truth to it, although the blast did produce a mushroom cloud.

A spokesperson with the rebel Donetsk People’s Republic told NahNews.ua that it was likely a missile that caused the blast, but he didn’t rule out the possibility of a factory explosion.

“There was a mushroom cloud over Donetsk,” one of the rebels told Ukrainian news website ZN.ua, and he added that “dozens of homes were left without windows.”

Early reports say it was a a Ukrainian army artillery attack that hit a weapons depot used by the Donetsk People’s Republic.

No casualties or damage were immediately reported from the huge blast at the plant in Donetsk, which the rebels said was hit by government shelling. The city lies in the middle of Ukraine’s industrial heartland and explosions like this have long been feared.

The fighting between Russia-backed separatists and Ukraine government forces has killed more than 5,300 people since April and displaced more than a million people in eastern Ukraine.

The rebel Donetsk News Agency said Monday the chemical plant west of the city was hit by a Ukrainian artillery shell but the fire was put out and it posed no danger to residents.

Here’s one of the Donetsk explosion videos uploaded on YouTube: