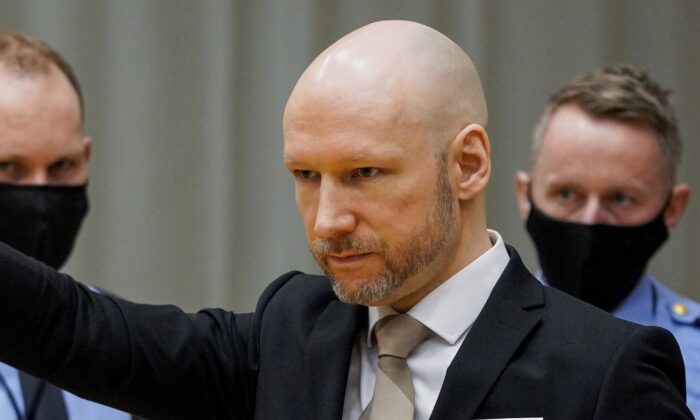 Norwegian mass killer Anders Behring Breivik arrives in court, on the first day of a hearing where he is seeking parole, in Skien, Norway, on Jan. 18, 2022. (Ole Berg-Rusten/NTB scanpix via AP)
International

SKIEN, Norway—Anders Behring Breivik, the right-wing extremist who killed 77 people in bomb-and-gun massacres in Norway’s worst peacetime slaughter in 2011, appeared Tuesday before a court for a parole hearing.

The Telemark District Court must rule whether Breivik is still so dangerous that society needs extra protection against him. and keep him behind bars A decade ago, the Norwegian mass killer was sentenced to 21 years in prison for the terrorist acts on the island of Utøya and in the government quarter in Oslo. It can be extended indefinitely.

Under Norwegian law, Brevik, 42, is eligible to seek parole after serving the first 10 years of his term.

Breivik, sporting a stubble beard and a two-piece suit, walked into the court room with white supremacist message pinned to his blazer, his bag and also held up a sign with the same message.

He made Nazi salutes as he entered the court and presented himself as the leader of a Norwegian neo-Nazi movement, suggesting he would use the parole hearing as an opportunity to manifest his white supremacist views rather than make an earnest attempt for an early release.

Prosecutor Hulda Karlsdottir started the hearing by saying the imprisonment conditions of Breivik, who legally changed his name to Fjotolf Hansen in 2017, will have no influence on the matter of parole.

They are “completely subordinate. The main topic here is the danger associated with release,” she told the court.

Families of the victims and survivors had feared Brevik would give a platform could inspire likeminded ideologues and grandstand his extreme views during the hearing, which experts say is unlikely to deliver him an early release.

“The only thing I am afraid of is if he has the opportunity to talk freely and convey his extreme views to people who have the same mindset,” Lisbeth Kristine Røyneland, who heads a family and survivors support group, said ahead of the hearing.

She pointed to the case of Norwegian shooter Philip Manshaus who, inspired by the 2019 New Zealand terror attacks, murdered his stepsister and attempted to storm a mosque.

It was July 22, 2011, when, after months of meticulous preparations, Breivik set off a car bomb outside the government headquarters in Oslo, killing eight people and wounding dozens. He then drove to the island of Utøya, where he opened fire on the annual summer camp of the left-wing Labor Party’s youth wing. Sixty-nine people there were killed, most of them teenagers, before Breivik surrendered to police.

The court that convicted him in 2012 found him criminally sane, rejecting the prosecution’s view that he was psychotic. Breivik didn’t appeal his sentence.

During his 2012 trial, he entered the courtroom daily flashing a closed fist salute and telling grieving parents that he wished he had killed more. He has been trying to start a fascist party in prison and reached out by mail to right-wing extremists in Europe and the United States. Prison officials seized many of those letters, fearing Breivik would inspire others to commit violent attacks.

He has shown no remorse and experts say the hearing is unlikely to deliver him an early release. It is being held at the gymnasium of the Skien prison—100 kilometers (60 miles) southwest of Oslo—where Breivik is held. He has always been isolated from other inmates.

The court is set to sit until Thursday and a ruling is expected later this month.

Ahead of the hearing, Randi Rosenqvist, the psychiatrist who has followed up Breivik since his 2012 jailing, said she could “not detect great changes in Breivik’s functioning,” since his criminal trial when he bragged about the scale of his slaughter, or his 2016 human rights case, when he raised his hand in a Nazi salute.

“In principle and practice someone seeking parole would have to show remorse, and to show that they understand why such acts cannot be repeated,” she said.