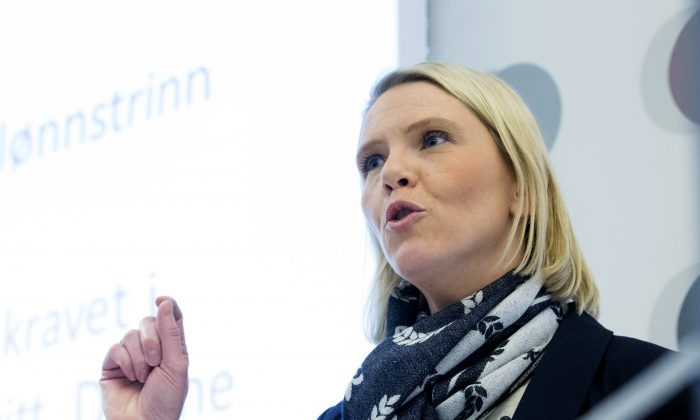 Norway's Minister of Immigration and Integration Sylvie Listhaug talks, during a press conference in the Ministry of Justice, in Oslo, Tuesday, Dec. 29, 2015. (Haakon Mosvold Larsen /NTB scanpix via AP)
Europe

STOCKHOLM—Norway’s center-right government on Tuesday proposed tightening the country’s asylum rules to avoid what the immigration minister described as “violent consequences” for the country’s welfare system.

The measures, which would need parliamentary approval to take effect, include making it more difficult for refugees to bring family members to Norway and raising the requirements for permanent residence permits.

The move comes after more than 30,000 asylum-seekers sought shelter this year in the wealthy country of 5.1 million people. Immigration Minister Sylvie Listhaug, of the right-wing Progress Party, noted that’s one of the highest numbers in Europe in relation to population size.

“If we are anywhere near the latter number it could have violent consequences for our welfare society,” Listhaug was quoted as saying by Norwegian news agency NTB.

Refugees are entitled to many of the same welfare benefits as Norwegians.

“It is very serious that politicians are using punitive measures that would make life more difficult for a number of asylum-seekers who are entitled to protection,” Andreas Furuseth, of the Norwegian Organization for Asylum Seekers, told NTB.

The coalition government also called for restrictions on who can get refugee status, which comes with more rights and benefits than other forms of protection.

Currently Norway grants refugee status to a wider group of people than those considered refugees under U.N. standards, including people who would be at risk of the death penalty in their home countries.

Listhaug told public broadcaster NRK that the measures would “make it less attractive” for asylum-seekers to come to Norway, whose offshore oil and gas resources have made it one of the world’s richest countries on a per-capita basis.