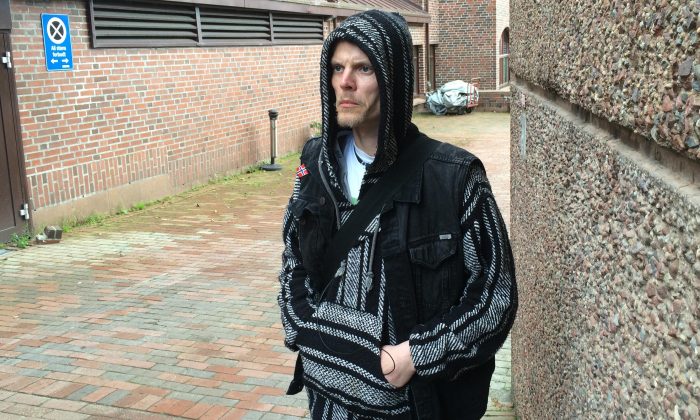 Norwegian heroin addict, Kim Arnetvedt, a member of the campaign group Association for a Humane Drug Policy, stands on a corner in Bergen, Norway, on Sept. 1, 2015. (AP Photo/Mark Lewis)
Europe

BERGEN, Norway—The pale, zombie-like addicts staggering through concrete underpasses make an unlikely scene in wealthy Norway’s picturesque second city. As a gateway to the fjords which zigzag the oil-rich nation’s long coastline, Bergen is the last stop on a global drug route that gives it one of the worst heroin problems in Europe.

Now with a change in local government here and in the capital, Oslo, there is an appetite to use radical policies to curb the alarming number of Norwegians who die from heroin overdoses each year. Alongside traditional replacement therapies, such as methadone, the new left-wing local leaders want to use a medical form of injectable heroin to treat the most at-risk users.

The official goal is to wean them off the drug entirely, but even the most ardent supporters admit the most achievable target is to bring them within a safer environment, while helping to tackle the crime associated with heavy drug use.

“We can’t go on criminalizing our drug users. We need the trust between us and the health professionals,” said Kim Arnetvedt, an addict and member of the Association for a Humane Drug Policy, a campaign group.

Norway has the worst heroin mortality rate in Western Europe with 70 drug deaths per million inhabitants in 2013, according to the EU’s drugs watchdog, the European Monitoring Center for Drugs and Drugs Addiction. In the continent as a whole, Norway trails only Estonia, with 127 deaths per million. The average is 16.

Like most of Bergen’s estimated 1,100 regular users, Arnetvedt spends much of his time near the city-run Straxhuset needle exchange center between the housing projects and the industrialized western edge of the city where addicts can get clean needles, medical help and a hot meal. He reluctantly dips in and out of medical rehabilitation programs run out of centers like this, but is highly suspicious of a health system that he says is too close to the police and makes “every day of addiction miserable.” He is treated with methadone and anti-depressants, but says he can’t imagine ever shaking his addiction to heroin.

Outside the needle exchange there is a more-or-less open drug market. Dozens of users and dealers cut deals unmolested by police. Last year a crack-down on heroin users in the notorious Nygaards Park in the center of town drove them into the tourist-heavy city-center. Straxhuset leader Hugo Torjussen says the unofficial policy is to allow them to congregate here instead. The proximity of health professionals makes it safer in case of overdose, and the new local government has cut through political deadlock to sanction a safe injecting room for users to shoot up their own gear inside.

Even so, a small number of addicts are either too suspicious or immune to the methadone to start treatment at all.

Ola Joesendal, deputy director of Bergen’s Haukeland Hospital, said more than 90 percent of the city’s heroin addicts receive methadone treatment. “But for a very small amount of addicted people it is not possible to establish contact through the (methadone) maintenance program,” he said. “If we have the opportunity to reach them through heroin, then they can be reached.”

Otherwise, their isolation from health professionals means they are the users most likely to die, he says.

Some are skeptical. Anti-drug campaigner Mina Gerhardsen says free heroin therapy would put too much strain on many of the vulnerable users it is intended to reach.

“They won’t be able to use this because you need to show up at the same place and time several times a day,” she said. “Many of these people are not capable of that.”

Gerhardsen also said the publicly-funded medical heroin programs would be too expensive. The cost of the treatment can reach some $22,000 per year, compared with an upper level of $3,800 per year for methadone, according to the EU drugs watchdog.

First synthesized from opium poppies in 1898, and marketed as “Heroin” by the German pharmaceuticals giant Bayer, diamorphine was initially prescribed as pain relief. Later evidence showed its addictive qualities and it was banned in most countries, but continued to be manufactured and made available in Britain, primarily for end of life care. It also survived as a street drug where it is mixed with other toxins and its purity varies dangerously.

In 1991, Switzerland established a small scale trial, using diamorphine to treat heroin addicts unresponsive to other treatments such as methadone. Later trials in Denmark, the Netherlands and Germany all showed that supervised injectable heroin can be effective for targeting this marginal group, according to the EU watchdog.

It said the therapy creates “major reductions” in their continued use of illicit street heroin, “major disengagement from criminal activities” and “marked improvements in social functioning.” Joesendal says this type of harm reduction is at the heart of the proposed policy.

The drug is still available in these countries in small-scale quantities and strictly controlled conditions.

However, wary of encouraging use rather than rehabilitation, in 2013 Norway’s Conservative-led national government rejected Joesendal’s application for a medical heroin trial.

Cecilie Brein-Karlsen, deputy health minister for the junior ruling coalition partner, the Progress Party, says the change in local government to Labor in September will not force the Department of Health to change its mind.

“It is not an option from the government’s point of view,” she said. “We think we should prioritize other measures.”

The government’s overdose prevention strategy advocates persuading users to switch to smoking, which is far safer than injecting. Yet it will not allow addicts to use Oslo and Bergen’s injecting rooms to smoke the drug.

Pricey doses of between $30-35 per hit make smoking wasteful for addicts who get a stronger high by injecting straight into their veins, especially considering that the average user will need four or more a day. In Norway, injecting has long been the preferred method.

The Conservative government has been radical in other ways. Straxhust is part of an ongoing trial to hand out and teach users how to administer Naloxone, a nasal drug that reverses the effects of overdose. Many of the addicts in the center say they have used the spray to save their friends.

Some have experienced it as a rare highlight in a tragic life. Birgitte Langoey’s is a depressingly familiar story of a childhood scarred by domestic violence.

“I grew up never with peace, always afraid,” she says. When her husband died at 31, and her 6-year-old son was taken into protective care, her grieving brother-in-law introduced her to heroin.

“Then it was no thinking, no feeling, no worries,” she says. Now 43, she has struggled with addiction ever since.

Earlier this year, when she found her boyfriend in spasms and blue on her kitchen floor, she was able to use the Naloxone kit to save his life.

“I am in heaven that he is alive,” she says.