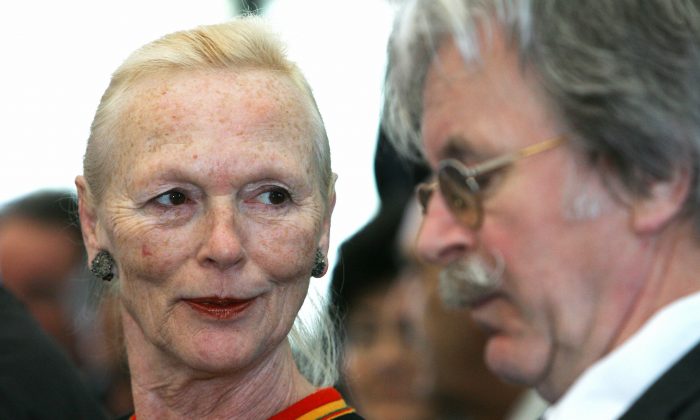 Gerd Fleischer (L), one of the 154 Norwegian nationals who were born during the Second World War from a Norwegian mother and a German father, talks with Bjorn Lengfelder (R) the press secretary of the union of Norwegian "lebensborn" children in the European Court of Human Rights in Strasbourg, France, on March 8, 2007. (Frederick Florin/AFP/Getty Images)
Europe

Norway Apologizes for Treatment of ‘German Girls’ During WWII

STOCKHOLM—The Norwegian government has apologized to Norwegian women who were mistreated after World War II for having relationships with German soldiers.

The treatment of the so-called “German girls” is a dark epilogue to the liberation from Nazi occupation in 1945. In addition to being publicly shamed, abused, and ostracized, thousands of girls and women who consorted or were rumored to have consorted with German soldiers during the occupation were also detained for months, and, in some cases, stripped of citizenship; many were expelled to Germany.

Prime Minister Erna Solberg said in a statement during an event in Oslo on Oct. 17 that the government had taken a fresh look at the state’s responsibility in the case of the “German girls.”

“Our conclusion is that the Norwegian authorities violated the fundamental legal principle that no citizen should be punished without a conviction, nor convicted without a law,” she said.

Along with the illegal detentions, Solberg spoke about Norway’s amendment of its citizenship laws in August 1945 to punish women who had married Germans after the invasion. The law was then applied retroactively to expel these women to Germany, an action that that violated the Norwegian constitution, Solberg said.

“On this basis, I want to apologize, on behalf of the government, for the way the authorities acted and treated Norwegian girls and women who had a relationship with German soldiers during the Second World War,” she said.

The law was amended again in 1950 to allow the women to regain their citizenship, but by then, many had formed a new life in Germany.

Gerd Fleischer, who was born in 1942 to a Norwegian mother and a German father, was present at the event. She said that the shame and trauma haunted these women for the rest of their lives, Fjordabladet reported.

“Our mothers never came forward. They took this to their graves,” she said.

It wasn’t just the women who were affected by Norway’s retaliation, but also their children. Some were placed in foster care or institutions.

Reidar Gabler, whose mother Else was a German girl, said the apology means a lot to him, NRK reported.

“Although it comes late, it’s important both for history and the relatives that they are now apologizing,” he said.

Gabler said that even his own children were called “German kids” and “Nazis” growing up.

The Norwegian government said it will fund further research into the issue, but will not pay any personal damages.

The apology comes after research by the Center for Studies of Holocaust and Religious Minorities, carried out on behalf of the Norwegian government, to coincide with the 70th anniversary of the UN Universal Declaration of Human Rights. According to the study, it’s hard to tell how many women had relations with German men stationed in Norway from 1940 to 1945, but a common estimate is somewhere between 30,000 and 50,000.

The study indicated that some women were singled out for reprisals, based solely on rumors. Of the women who did have contact with German soldiers, it was rarely ideologically or politically motivated, the study said.