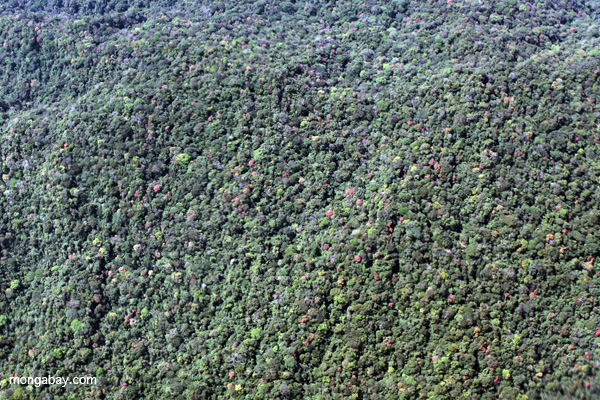 Norway and Germany Save Peru’s Environment

From the Andes to the Amazon, Peru houses some of the world’s most spectacular forests. Proud and culturally-diverse indigenous tribes inhabit the interiors of the Peruvian Amazon, including some that have chosen little contact with the outside world. And even as scientists have identified tens-of-thousands of species that make their homes from the leaf litter to the canopy, many thousands more remain undiscovered and nameless.

Yet Peru’s forests are facing a barrage of threats: unscrupulous oil and gas companies, illegal logging, conversion for agriculture, massive road building, and industrial and artisanal gold-mining among others. Indigenous leaders have lost their lives striving to protect their forests, and some species are on the brink of extinction. The crisis has also spread beyond the forest: Peru’s government and its civil society have been roiled by social and ecological conflict stemming from forest destruction seemingly far-away from the capital in Lima. While the battle for Peru’s forests seems to have no end in sight, a new agreement announced yesterday at a landmark UN Climate Summit in New York City could prove a turning point. Yesterday, the President of Peru, Ollanta Humala, announced that his country has signed a partnership with Norway and Germany to make his country carbon neutral in terms of deforestation and agriculture by 2021. Moreover, the Letter of Intent, as it is called, pledges to grant land title of at least 5 million additional hectares for indigenous tribes in the Amazon, something many tribes have been fighting long and hard for. “We do this because it is in the self-interest of Peru, but the support of Germany and Norway will help us in what will surely be a challenging transition phase,” said President Humala, adding that “there is growing evidence that economic growth and environmental protection can be combined.” For its part, Norway has pledged to pay Peru up to $300 million for verified results over the next six years. Germany, which has long supported Peru on conservation issues, has pledged to maintain its financial support for the country during the same period. “This agreement represents a partnership grounded in transparency and accountability, and a fundamental understanding of the relationship between socially equitable and economically sustainable development, land rights, land use, and climate change,” said Erna Solberg, Prime Minister of Norway, yesterday in New York. The agreement is especially timely as Peru is hosting the next United Nations Climate conference in less than three months, which is meant to smooth the way for a new international agreement in Paris in 2015. This news is likely to help shield Peru from the criticisms of inaction that has been poured on other host nations in recent years, such as Poland and Qatar. A portrait of an embattled forest Peru’s forests remain some of the most intact on the planet, even as they face rising perils. According to Global Forest Watch, just over 60 percent of the country is covered by forest, equaling more than 77 million hectares. This forest, much of which is still old-growth, currently houses 8,560 million metric tons of carbon in its vast biomass, according to the FAO. Yet rising deforestation is one of the primary drivers of Peru’s carbon emissions. In 2011, land use and forest-related carbon emissions accounted for 46 percent of Peru’s total. Globally, such emissions account for a much lower percentage: between 10-15 percent. However, scientists and experts have long argued that tackling deforestation worldwide could be one of the quickest ways to decrease global emissions in the near-term. Of course, preserving forests comes with many other benefits: biodiversity conservation, watershed protection, rainfall production, erosion prevention, and, of course, indigenous and community rights. In recent years, like many other places around the world, deforestation has been on the rise in Peru. According to Global Forest Watch, the country lost 86,204 hectares of forest in 2001. By 2012, that number jumped to 246,456 hectares, up 185 percent in a little over a decade. During the whole 12-year period, Peru lost more than 1.5 million hectares of forest. Meanwhile regrowing forest was small in comparison, at 191,037 hectares. Pledges for a new Peru? The new agreement among Peru, Norway, and Germany pledges to turn these disturbing trend around. In the short term, the agreement promises to reduce deforestation from logging and mining; establish instruments to kick-start a new forest law; work with the rising number of companies who have already committed to zero deforestation policies; and develop systems to track how well the country reduces emissions from deforestation.

In addition to granting legal title of five million hectares of forest to indigenous owners, the agreement also pledges to incorporate two million hectares of indigenous land in conservation payment programs. This means that indigenous groups could earn money for safeguarding their forests if certain conditions are met.  “Our indigenous peoples’ groups have traditionally been the best guardians of our forests,” said President Humala. “By embarking on this path of deforestation free development, we hope also to reach out to our indigenous peoples and move together towards a more harmonious future.” In a tentative sign toward a better relationship, the agreement was welcomed by Peru’s most powerful indigenous organization, the Interethnic Development Association for the Peruvian Amazon (AIDESEP). “The signing of this agreement is a milestone in the building of a new partnership with the government of Peru, one that aims to address the social, economic and environmental indigenous agendas and to ensure the conservation of our Amazon forests in the long run,” said Daysi Zapata, the Vice President of AIDESEP. Indigenous rights test AIDESEP still has a number of concerns, however. In a statement released by the organization in conjunction with the Rainforest Foundation Norway (RFN), both groups point to many potential barriers in making the program a reality. “Peru has lately weakened its environmental policies related to forests. As data recently published by RFN show, Peru did not achieve to reduce its deforestation rate during the last decade,” write the groups, adding that indigenous people “are facing increased threats by logging, oil and gas development and other encroachment on their traditional territories.” Indeed, a few weeks ago four Ashaninka men were murdered, including well known indigenous leader and environmental activist, Edwin Chota Valera. Experts say the killing was likely done by illegal loggers who were fed up with the indigenous people speaking out on land rights.
Despite the murders—which made global news—AIDESEP and RFN say the government “has not taken any action to recognize these leaders’ legitimate demand for land titling.” The groups warn that unless Peru, Germany, and Norway are diligent, the agreement “may become only a statement of intentions, not reality, due to the strong conflict of interest within the Peruvian government and because of weak formulations regarding indigenous peoples’ control over their ancestral territories.” According to AIDESEP, indigenous groups have registered claim over 20 million hectares in the Peruvian Amazon, but even winning title for all of these lands wouldn’t be enough.  “Key points that should be strengthened are policies to avoid further land grabbing from indigenous to other uses; to secure transparency and full participation by indigenous peoples and civil society; and the implementation of the forest law that includes measures against further forest degradation and an effective promotion of community forest management,” say the groups. A big day for forests? The Peru, Norway, and Germany agreement was just one of several forest-related announcements made at the UN Summit yesterday. Norway also announced a similar agreement with Liberia to halt deforestation. And, the multinational, big-agriculture company, Cargill, pledged to expand its zero deforestation policy from covering just palm oil to every single commodity it trades in. Still, the most wide-ranging pledge came from an alliance of countries, corporations, and NGOs in the form of the The New York Declaration on Forests. The declaration pledges to cut deforestation rates in half by 2020—just six years away—and end deforestation altogether by 2030. Moreover, the declaration pledged to restore forests across 350 million hectares to reduce pressure on old-growth forests and sequester carbon.
The agreement was undercut by the fact that Brazil didn’t sign on. Home to the bulk of the Amazon, Brazil has the second most forest on the planet—after Russia—and has significantly decreased deforestation in the Amazon over the last decade. Of course, the real test will be whether or not any of these paper promises can actually achieve progress on the ground. In Peru’s case, if the scrutiny of Germany and Norway—along with their financial help—can help it tackle deforestation across the board, it may not only be a turning point for that country’s forests, but a model for how forest-rich countries can step back from the brink of destruction. “We have a lot of work to do to protect Peruvian forests, to formalize the rights of Peruvian indigenous peoples, to put Peru on a path toward sustainability,” said President Humala. “This agreement is an important step for us.” A first step, but the next ones will likely be the most important.
This article was originally written and published by Jeremy Hance, a contributing writer for news.mongabay.com. For the original article and more information, please click HERE.