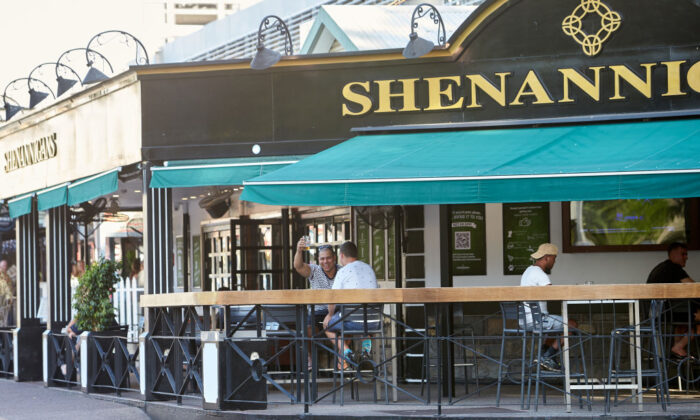 People sit and drink at Shenannigans Restaurant Bar on Mitchell St in Darwin, Australia on May 15, 2020 . (Shane Eecen/Getty Images)
Australia

Licensed hospitality venues in the Northern Territory are seeking clarity on why the new vaccine pass mandate applies to them but not unlicensed premises.

The vaccine pass, announced by the Territory Government on Monday, requires that patrons show proof of vaccination before entering pubs, clubs, casinos, and restaurants with a liquor license.

However, the rule does not apply to cafes and unlicensed restaurants, leaving some licensed hospitality businesses questioning what role alcohol consumption plays in heightening the risk of COVID-19 transmission.

“There are no logical health explanations behind these decisions, which makes me think it’s for political reasons rather than for health reasons,” Wundke said.

With staff shortages already impacting the industry, he said it would suffer further because venues now have the additional role of policing the vaccine pass system.

“There needs to be more support for us,” Wundke said.

“You can go and play contact sports, but you can’t go to the pub afterwards. How does that make any sense?”

When asked at a press conference on Tuesday about the logic behind licensed but not unlicensed venues being subject to the mandate, Deputy Chief Minister Nicole Manison said the territory government believed alcohol was the defining difference.

“I think in any setting, when you do add alcohol, you do generally increase the chance of risk, and how people interact with each other,” she said.

The Epoch Times reached out to Northern Territory Health for comment but had not received a response at the time of publication.

A World Health Organisation fact sheet from 2020 called “Alcohol and COVID-19: what you need to know”, lends support to Minister Manison’s comments in a section talking about alcohol’s effect on the ability to physical distance.

“Bars, casinos, night clubs, restaurants and other places where people gather to consume alcohol
(including in the home) increase the risk of transmission of the virus,” it reads.

Meanwhile, unvaccinated Territorians will be unable to enter any licensed premises under the new direction.

In comments on Tuesday, Chief Minister Michael Gunner tried to redirect Territorians’ response about the new vaccine pass away from the hospitality staff who are enforcing the order, saying that the blame should be placed on him, not them.

“It’s not our hospitality venues that are responsible for this law. We are,” Gunner said.