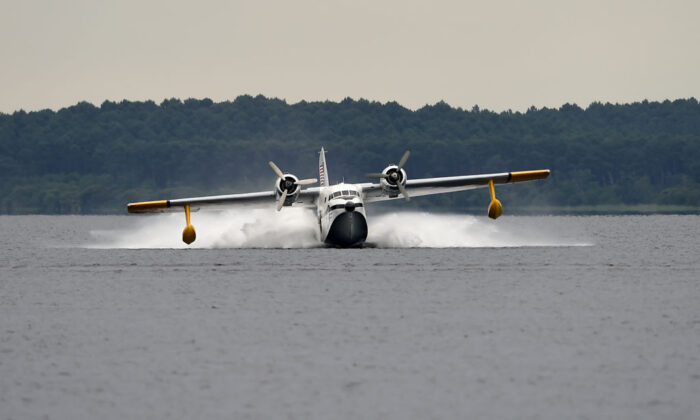 A Grumman Albatross plane lands on the water during the International seaplane show in Biscarrosse, southwestern France, on June 9, 2018. (NICOLAS TUCAT/AFP via Getty Images)
Australia

The Northern Territory (NT) has beaten New South Wales and Queensland to secure a deal to construct the iconic Albatross amphibious aircraft at Darwin Airport.

This will make the Territory Australia’s first manufacturer and exporter of the Albatross G-111T, an aircraft capable of taking off from and landing on land, snow, ice, and water, according to a  media release on Wednesday.

NT Minister for Mining and Industry Nicole Manison said that the investment is building a brand new industry for Australia.

“This means jobs, jobs and more jobs for Territorians, and new opportunities for locals and businesses,” she said.

Although the Albatross hasn’t been commercially manufactured since the 1960s, it has an excellent reputation, and evidence from market studies has shown there is significant demand for it to fill a gap in the global aviation market.

Chair of AAH Khoa Hoang said that the Albatross is unparalleled in its class.

“With the new technologies that Amphibian Aerospace industries will be developing in new variants of the G-111T Albatross, we are confident that a formidable aircraft will be relevant for many decades to come.”

Through this venture, the AAH is expected to bring in an annual revenue of over $100 million (US$71.8 million) by 2030, generating considerable value to the NT economy.

Chief Minister Michael Gunner hailed the deal as big for both the Territory and Australia, highlighting that these aircraft will be exported to the rest of the world.

“This exciting venture will create hundreds of jobs and upskilling opportunities for Territorians while also injecting millions into our economy,” he said. “The Territory is taking off, and this is just the beginning.”

The AAH is planning to implement a “buy local” policy, meaning the venture will utilise local industry that meets the necessary standards on a cost-competitive basis. The objective is to develop a fully local workforce and an advanced manufacturing facility that can create and sustain new jobs, as well as provide highly skilled career pathways.

Aboriginal employment will also be a focus of this program, with targeted training and workshops set up to increase the long term and sustainable employment of Indigenous Territorians.

The AAH has chosen Darwin Airport to be their Australian manufacturing base, and they will be working closely with the Airport Development Group within the Darwin Airport business precinct on a construction plan set to be formulated in 2022.

Meanwhile, the modified aircraft is expected to be certified by the Civil Aviation Safety Authority within 18 months, with production underway by 2025.