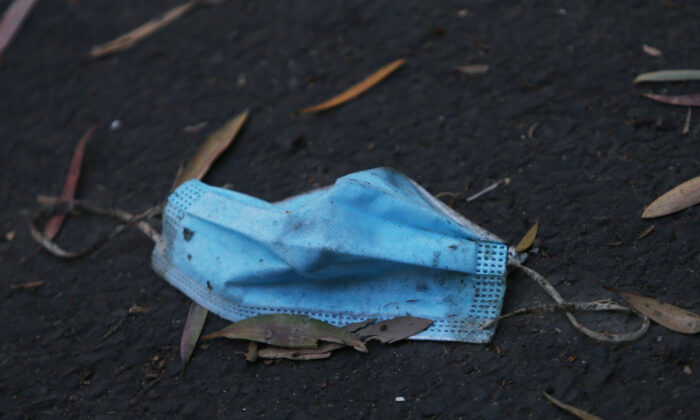 A face mask is seen on the ground in Redfern in Sydney, Australia on September 11, 2021 (Photo by Lisa Maree Williams/Getty Images)
Australia

Northern Territory (NT) Chief Minister Michael Gunner announced on Wednesday that the NT-wide indoor mask mandate would end as of next Monday.

“So we can now say with some certainty that we have passed the peak,” Gunner said.

This comes after Shadow Health Minister Bill Yan expressed frustration on Monday over the ambiguity of the Chief Minister’s comments on when the mandate would be lifted.

Gunner had indicated recently that they were looking to lift the mandate but couldn’t give a date and used vague expressions like ‘sooner rather than later’ and ‘days not weeks’, prompting Yan to write a media release calling on Gunner to be precise.

Gunner said on Wednesday that “every temporary restriction or rule we have enacted during this pandemic has always been just that, temporary. In place for as long as necessary, but never a day longer than that.”

He added that NT health experts advise that the indoor mask mandate has enabled them to stay in control as case numbers grew until getting through the peak.

As that has now been achieved, their advice is that the NT-wide indoor mask mandate is no longer necessary.

“Now that we are past the Omicron peak, it is time for the Territory to enter the next phase, where we continue to live with the virus, but with more freedom and more personal responsibility,” Gunner said.

The mandate has been left in place till the end of the week to be certain of the downward trend.

While from Monday, people won’t have to wear masks indoors unless they choose to, the mandate will remain for high-risk settings such as hospitals and other health care facilities, as well as disability and correctional facilities.

In addition, Gunner indicated the mandate would need to remain slightly longer in specific locales, such as the Big Rivers region, which is not seeing the same downward trend as other regions.

In accordance with federal rules, masks still need to be worn in airports and on flights.

Along with the mask mandate being lifted, compulsory use of the NT check-in app also ceased as of Wednesday.

This means that the app is only required when visiting venues where proof of vaccination is needed, such as licenced venues like bars, pubs, and restaurants, but excluding takeaway restaurants.

However, businesses who wish to keep displaying the check-in information are able to, and patrons who wish to check in where it is available can do so.

Therefore, the check-in infrastructure will remain in place, so that wherever it is used, alerts can still be sent out to notify people of possible COVID-19 exposure.