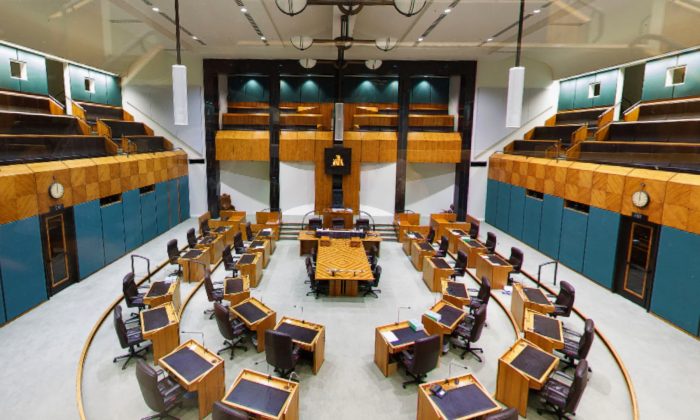 Northern Territory Treasurer Nicole Manison has denied responsibility for the awarding of a $10 million-plus taxpayer-funded grant to a bottled water company shortly before it went broke.

The NT government has been under pressure in parliament this week to explain why the now defunct Infrastructure Development Fund it set up gave $10.5 million in taxpayer money to the company, NT Beverages.

The grant that was made 12 months ago is being presented in parliament by Opposition Leader Gary Higgins as an example of fiscal mismanagement and why the government is facing a “financial crisis”.

A report late last year showed the government was borrowing over $1.5 billion this year, or $4 million a day more than its income to meet costs.

Independent MP and former NT Treasurer Robyn Lambley threatened on Wednesday to take the matter to the NT Independent Commission against Corruption unless Treasurer Ms Manison launched an investigation.

The treasurer conceded the IDF had failed but said her Labor government was merely following through on the previous CLP government’s vision for it, which included it making independent decisions.

“When it came to NT Beverages, that investment decision was independently made by the independent board (of NT IDF),” she told parliament.

“It raises some very big questions with regards to some of those decisions that were made there.

“Very prominent people sat on that board.”

However Ms Manison and NT Chief Minister Michael Gunner have so far refused to investigate or try to recoup the $10.5 million.

The NT’s most powerful public servant, chief minister’s department CEO Jodie Ryan was on the board of the IDF until it was shut down late last year.

“The Territory budget is in structural deficit, meaning there is a fundamental imbalance between receipts and expenditures that is not related to one-off or short-term factors,” the report said. “This problem will persist in the absence of a plan for doing business differently.”

The report explained that over the past 20 years, the NT incurred deficits in its budget, which has made it harder to budget and manage debts in the current economic downturn.

“When the government came to power in August 2016, the Territory had been enjoying the highest level of untied GST revenue since the GST commenced in 2000-01,” the report said.

The report urged that the government adopt a medium to long-term plan to balance its budget by no later than 2030.

Currently, there is no definitive plan, but the government is seeking public consultation, including input from industry and unions for help to address the issues.