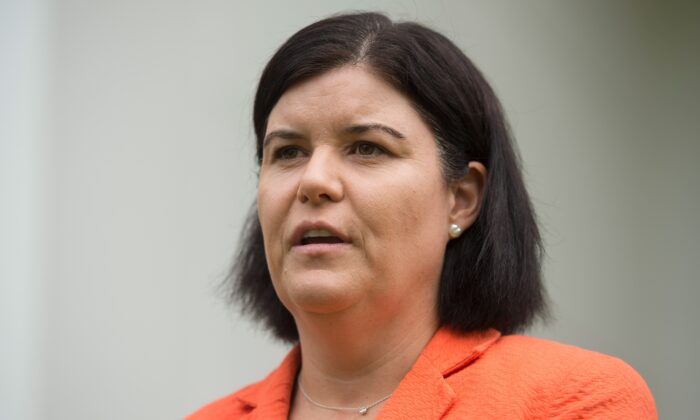 Northern Territory (NT) Chief Minister Natasha Fyles says residents could be given a vote on whether to permanently ban alcohol in central Australia amid a soaring crime wave in Alice Springs.

“We can’t look at Alice Springs in isolation; we need to look at the broader community,” Fyles told ABC Radio National on Jan. 25.

“Do we get the Electoral Commission to go out to these communities … and then the matter can be settled confidently knowing that all views have been heard.”

Fyles also noted, though, that several other Indigenous communities had told her personally they were opposed to a ban because they wanted to live and drink like other Australian communities.

“Ensuring that we have all voices heard is something that I want to make sure is in those alcohol management plans,” she said.

The NT government yesterday announced a raft of new restrictions on alcohol sales in Alice Springs as a temporary measure to help police deal with the youth crime wave in the region.

Sales of takeaway alcohol will now be banned on Monday and Tuesday, and hours of alcohol serving will be reduced on the remaining days of the week from 3 p.m. to 7 p.m.

The government will also introduce a ban on multiple alcohol transactions, with Alice Springs residents only allowed to make one takeaway purchase per day via the banned drinker register.

“We need to give the community respite and support, and we need to do that immediately,” Fyles said.

Alcohol bans in central Australia were first implemented in 2007 during the federal government’s Northern Territory’s Emergency Response, also known as the NT Intervention, under then-Prime Minister John Howard. It aimed to deal with lawlessness and crime in Indigenous townships and communities.

The measures were continued in 2012 under Prime Minister Julia Gillard’s Stronger Future legislation (pdf), which expired in July 2022.

At the time of their expiration, the Albanese government said that it supported the right of Indigenous people in the NT to determine their futures and “live strong, independent lives, where communities, families and children are safe and healthy.”

Prime Minister Anthony Albanese rushed to Alice Springs on Jan. 24 in response to calls for his presence in the region.

He announced the federal government would spend $48.8 million (US$34 million) over “the next two years in Alice Springs to tackle crime, keep women and children safe and provide support to young people in communities.”

Overseeing the NT and federal responses will be a newly appointed central Australian regional controller, Dorelle Anderson, who will also report back to the federal and NT government on Feb. 1 about the results of the alcohol sale restrictions.

The federal government will also provide $2 million to improve CCTV, lighting and safety measures throughout Alice Springs, $5.6 million for additional emergency accommodation and safe spaces to give young people a place to go to at night.

While an extra $2 million will go towards boosting domestic violence services and $25 million to safety and community services.

This is on top of $253 million already allocated for Central Australia in the federal budget.

The Northern Territory Police Commissioner James Chalker told ABC Radio on Jan. 24 that he believed alcohol had a big role to play in rising criminal activity.

“It is certainly our view that that’s part of the problem at the moment,” Chalker said, noting police in Alice Springs were seeing, on average, 300 people split across two bars drinking from mid-morning then leaving with more alcohol when takeaway sales open at 2 p.m.

“That causes part of the problem and certainly lifts community apprehension when they see so many people already on the way to intoxication,” he said.

Current crime statistics for Alice Springs have spiked in the past six months with assaults and domestic violence rates soaring by 38.01 percent and 47.22 percent, respectively.