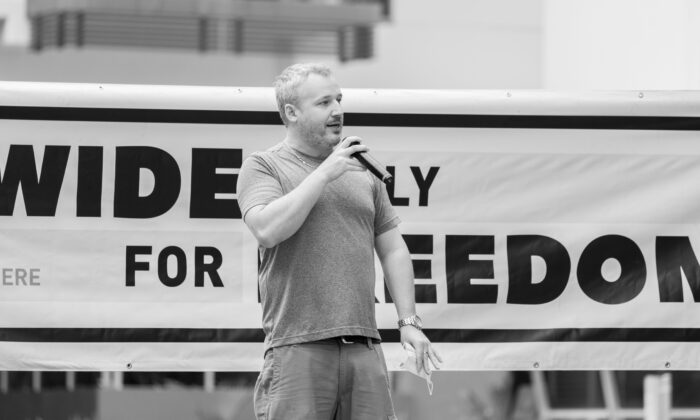 Country Liberal Party (CLP) vice-president Jed Hansen has been reprimanded by party president Jamie Di Brenni over a speech he made at an anti-vaccine mandate rally in Darwin on Jan.22.

Hansen told NT News that Di Brenni spoke to him about his giving the impression that his personal opinion was representative of others in the CLP.

“It was a verbal reprimand, but it was more like, I could have phrased my wording better,” Hansen said.

Speaking at a Worldwide Rally for Freedom on Saturday, Hansen said “Now I know that the CLP point of view is that they all universally support the vaccine mandate. I can absolutely tell you that not everyone does because I do not.”

“I’ve made my position very clear to Lia (Finocchiaro) that not everyone supports that position,” he said.

This comes after the NT Labor Government implemented a vaccine mandate for the vast majority of Territory workers in December, and more recently made a vaccine pass mandatory for entry into licenced premises.

The CLP has been overall supportive of the mandates.

At the rally, Hansen went on to say that vaccines are by right a choice for the individual, shouldn’t be imposed by the government through mandates, and that government should never get in the way of people’s rights to seek work and make health choices for themselves and their children.

“That’s the position I have and there are many people like me who share this view, so don’t label us all the same way,” he said.

He also spoke of his adverse reaction to the second dose of the COVID-19 Pfizer vaccine but made it clear he was not an anti-vaxxer.

He said he had no reaction to the first dose, but within 12 hours of the second one, “I was essentially paralysed in bed. I could not move. I was like that for 3 days, couldn’t walk, couldn’t move.”

He added that he’s had neurological problems ever since, including a persistent shake in his right arm, and that doctors, bar one in Melbourne, have dismissed the fact that it’s vaccine-related.

“I find it alarming and distressing that the doctors here are either being subject to political power … they can’t speak (to) what is actually happening.”

In a statement to NT News, CLP president Jamie Di Brenni made it clear that Hansen was voicing his personal opinion at the rally.

“He is entitled to [voice that opinion] but does not speak on behalf of the party. Only the president of the CLP has that authorisation,” Di Brenni said.

“Mr Hansen has been reprimanded for breaking protocol.”

Di Brenni added that the CLP consists of members with a diverse range of opinions, which has always been their position as a grassroots, community-driven party.

Meanwhile, Deputy Opposition Leader Gerard Maley responded on behalf of his boss Lia Finocchiaro, saying that any comments Hansen made are “a matter for him”.

“We acknowledge the mandate has been divisive among Territorians but ultimately, the CLP is committed to following the best health advice. It’s a policy we took to the last election and we steadfastly stand by that commitment,” he said.

“Following a briefing with the deputy chief health officer, who advised the Opposition that mandating the vaccine for certain workers is the best health advice, the CLP Opposition agreed to support the mandate.”

Hansen was not the only CLP member at the freedom rally that day.

In an interview with NT News at the event, CLP senator Sam McMahon said she sympathised with a lot of those affected by the mandates.

“But I do support people’s right not to be if that’s their choice.”

The Epoch Times reached out to the Chief Minister’s office for comment on the views expressed by Hansen but did not receive a response at the time of publication.