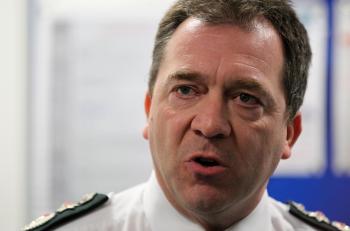 Chief Constable Matt Baggott speaks to journalists, after a bomb exploded and killed a Northern Ireland police officer, on April 2, at the Police station of Omagh. Omagh is the same city where in 1998 a car bomb attack killed 29 people. (PETER MUHLY/AFP/Getty Images)
Europe

Baggott said he wished to thank everyone for their support and praised those who “stood up to be counted in such a powerful way about the policing we provide today and the policing that we will continue to provide.” He said that PSNI is an impartial organization that “exists to do good things.”

“Nothing will deflect us from the commission that we have been given; the commission to continue to protect people and make their lives safer, to give our young people a future … our commitment remains solid,” explained Baggott.

It is speculated that dissident Republicans wish to deter Catholics from joining the PSNI.

The Northern Executive, which is the governing body in Northern Ireland, issued a statement by First Minister Peter Robinson, condemning the murder.

"The murder of a young catholic policeman newly recruited to the PSNI is shocking and deplorable. … This attack is intended to deter young Catholics from joining the police, and I urge them not to be deterred by those who have nothing to offer our society.”

Robinson continued, saying that he believed that it was the intention of those who perpetrated this act “to destabilize our community” before the local elections in May.

He took the opportunity to send the murderers a “very clear message,” that is, “the devolved institutions in Northern Ireland are stronger today than they have been at any other time in our history. The people of Northern Ireland have rejected violence, and this act will not further the cause of dissidents one iota.”

McGuinness was also strong in his condemnation, saying, "in joining the PSNI this young man sought to protect and serve the community; to be part of defining a better future for us all.

Public figures in Southern Ireland have also spoken out about the killing this week including Alan Shatter, minister for justice, equality and defense, and Foreign Affairs Minister Eamon Gilmore.

"There has been so much work put into building the peace in Northern Ireland that we cannot allow a tiny minority of people who have no mandate from anybody, who are intent just on evil to blow it off course and we will provide whatever support is necessary to do that," Gilmore told Radio 1.

Unfortunately, this is not the first time that Omagh residents have suffered at the hands of paramilitary forces. In 1998 the Real IRA carried out a car bomb attack that killed 29 people, including a pregnant woman carrying twins.