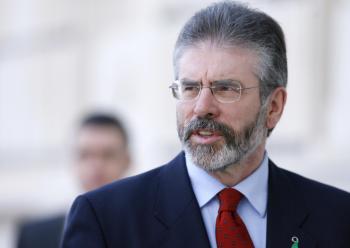 Robinson and McGuinness put Northern Ireland Executive back on track

Politicians for the north and south of Ireland are delighted that the northern executive is back on track, with Sin Fein and the DUP scheduled to meet at the first Executive meeting in five months this week.

The main factor hindering the Executives progress was the issue of devolution of policing and justice powers. Recent mounting pressure in Northern Ireland has helped expedite the process.

National Irish television station RTE published an article that said, “Gerry Adams is believed to have got a sense of how Stormont's stalemate was being viewed internationally when he visited the US on a Sin Fein fund raising tour last week.

“Mr. Robinson is said to have gotten the message from his own Assembly back benchers that they wanted the Stormont institutions up and running again."

Presently procedures have been put into place to resolve the policing issue by early 2009. These steps will include the workings of the new Department for Justice and how the implementation will be financed.

According to an article published in the Belfast Telegraph “Senior QC John Larkin a professor of criminology and a Catholic who was born in west Belfast would become Northern Ireland’s new Attorney General.

“The Justice Minister would until May of 2012 be elected under a cross community vote in the Assembly requiring a majority of nationalists and unionists.”

On hearing the good news Taoiseach Brian Cowan said in a statement, “I warmly welcome today’s announcement by the first and deputy First Ministers.

"It is of great importance that devolution of policing and justice powers proceed. Its successful completion will be the final piece of the jigsaw of the peace process.”

He also mentioned that his Government, along with the British Government, will continue to offer
their support to the parties in Northern Ireland. The Taoiseach looks forward to working with the new executive in the North/South Ministerial Council where both governments could focus on resolving the new economic challenges now facing everyone who lives on the island of Ireland.

“I commend the hard work and leadership shown by Peter Robinson, Martin McGuinness and their colleagues in coming to an agreement on these difficult issues. They have once again shown that democratic politics works.” said Taoiseach Brian Cowen.

Speaking during an address to the Northern Ireland Medico Legal Society at Queen's University, Belfast, the President said, "One important dimension of today's good news is the signal it sends about the growing maturity of the new dispensation at Stormont."

The Irish President commented on how this process has taken time to be achieved but that this was time well spent as the correct outcome was achieved for all involved. In closing President McAleese said, "for the new dispensation to work, its DNA must clearly be characterised by partnership and today's announcement suggests that we may dare hope that this is indeed the case."