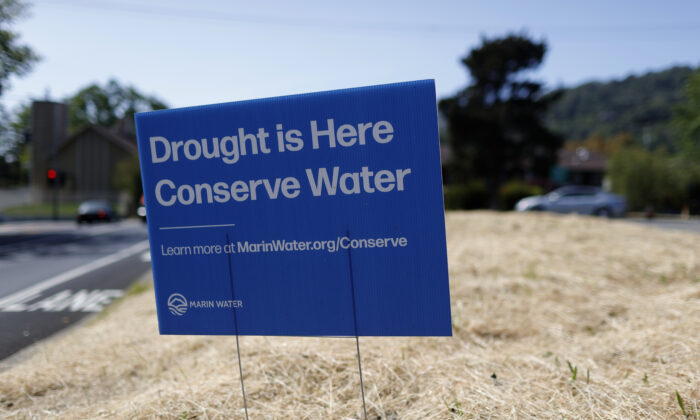 A sign advocating water conservation is posted in a field of dry grass in San Anselmo, Calif., on April 23, 2021. (Justin Sullivan/Getty Images)
Australia

The Australian Bureau of Meteorology (BOM) has confirmed that the south pacific is heading into its third consecutive La Niña weather event, meaning continued dry conditions for the southern parts of the United States, a colder and wetter winter in the northern U.S. and Canada, and a wetter summer for those on the east coast of Australia.

The head of BOM long-range forecasts, Andrew Watkins, said the bureau’s three-month climate outlook shows a high chance of above-average rainfall for most of the eastern half of the Australian mainland and eastern Tasmania.

“During La Niña events, waters in the eastern tropical Pacific Ocean are cooler than normal, and waters in the western tropical Pacific Ocean warmer than normal. This causes changes in wind, cloud and pressure patterns over the Pacific,” BOM said. “When this change in the atmosphere combines with changes in ocean temperature, it can influence global weather patterns and climate, including increasing rainfall over large parts of Australia.”

Watkins said that forecasters advise communities in eastern Australia, which has seen above-average rainfall for the past two and half years, should be prepared for above-average rainfall over spring and early summer. They believe that the weather pattern is weaker this time around and may peak during spring before easing during summer.

According to the U.S. National Oceanic and Atmospheric Administration (NOAA), during periods of La Niña, trade winds are even stronger than usual, pushing more warm water toward Asia. Off the west coast of the Americas, upwelling increases, bringing cold, nutrient-rich water to the surface.

These cold waters in the Pacific push the jet stream northward. This tends to lead to drought conditions in the southern U.S. and heavy rains and flooding in the Pacific Northwest and Canada. La Niña can also lead to a more severe hurricane season.

The World Meteorological Organization (WMO) in 2020 noted that during a La Niña event, the Greater Horn of Africa and Central Asia received below-average rainfall. However, there are also data sets, like an analysis completed by James Peacock, the Head Meteorologist at MetSwift, that demonstrate strong La Niña events can also generate below-average rainfall in Europe.

According to WMO Secretary-General Prof. Petteri Taalas, the weather event will generate a cooling influence on global temperatures for a temporary period. However, he noted that it was exceptional to “have three consecutive years with a la Niña event.”

Meanwhile, South East Asia, some of the Pacific Islands and the northern region of South America will receive above-average rainfall.

Meanwhile, Watkins warned Australians that the weather event was looking more dire because it was combining with two other weather events in the Indian Ocean and the Southern Ocean.

“La Niña is not the only driver influencing this wet outlook. To our west, a significant negative Indian Ocean Dipole (IOD) event is underway,” Watkins said. “The Southern Annular Mode (SAM) is also in a positive phase and likely to remain positive into summer.”

He said all these climate influences push Australia’s climate towards a wetter phase and together have shaped the outlook for the coming months that show more than 80 percent chance of above-average rainfall for many parts of the eastern half of Australia.