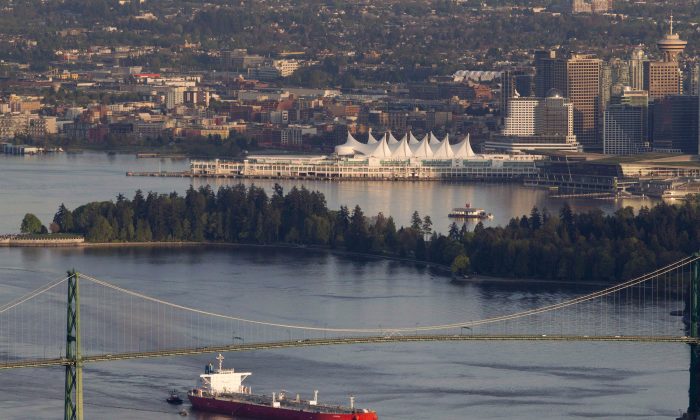 An oil tanker goes under the Lions Gate Bridge as it enters Vancouver Harbour on May 5, 2012. Now, the National Energy Board has endorsed an expansion of the Trans Mountain pipeline following a reconsideration of its impact on marine life off the B.C. coast. (The Canadian Press/Jonathan Hayward)
Canadian Content

On Tuesday the federal government announced it would approve (with conditions) the Northern Gateway project; an ambitious pipeline project to take Alberta oil products to tidewater.

The Canadian Chamber of Commerce has been a long time supporter of the Northern Gateway project.

Our support derives from two factors.

Firstly, the project itself will be a huge contributor to the economies of Canada and British Columbia, both during construction and once the pipeline is operating. Included among the beneficiaries will be Canadians in aboriginal communities who’ve waited a long time for their chance to share in the natural resource wealth.

But secondly, this is one of the major projects which will determine if Canada is going to get its ample petroleum resources to the world markets. There could hardly be a more urgent issue facing our economy; over the last three years the United States has made extraordinary strides in production of its own petroleum sources.

Our customer for decades, the U.S. will soon compete with us for lucrative markets in Asia and Europe, while buying less of our product directly. Unless we find new markets, we will likely endure a sharp decline in our standard of living.

At the Chamber of Commerce we understand the concerns so many people have about the environmental challenges of this and other projects. But we believe strongly that Canadian engineers, technicians, and transporters can move these products safely, just as they have done for decades in British Columbia, across the country, and in the waters of St. Lawrence and the Atlantic.

Across the wide Pacific, Asian economies are growing at incredible speed. The centre of demand for energy of all kinds is shifting from traditional markets to these new Asian ones. Our economic opportunity is obvious and enormous. With this project and others, we can seize it.

Perrin Beatty is President & Chief Executive Officer of The Canadian Chamber of Commerce.