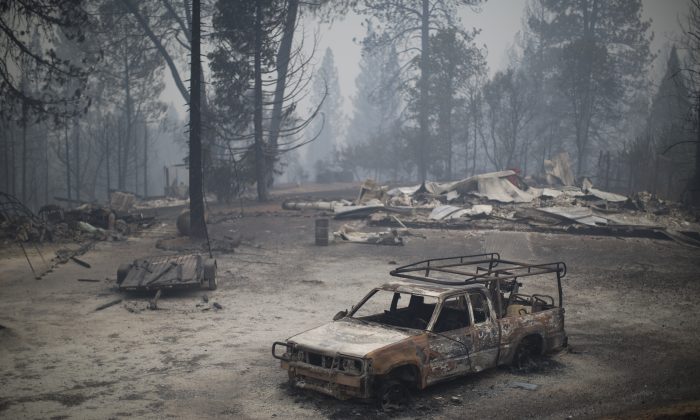 SAN ANDREAS, CA - SEPTEMBER 13: A burned truck and structures are seen at the Butte Fire on September 13, 2015 near San Andreas, California. California governor Jerry Brown has declared a state of emergency in Amador and Calaveras counties where the 100-square-mile wildfire has burned scores of structures so far and is threatening 6,400 in the historic Gold Country of the Sierra Nevada foothills. (Photo by David McNew/Getty Images)
US

But it’s not the only one. A second massive blaze, less than 200 miles away, destroyed 135 homes as it spread through Amador and Calaveras counties in Sierra Nevada. That fire was 30 percent contained.

Both fires have displaced 23,000 people, Mark Ghilarducci, director of the Governor’s Office of Emergency Services, said at a news conference with Gov. Jerry Brown.

An elderly, disabled woman who was trapped in her home died in the wildfire about 20 miles outside the famed Napa Valley. Others are missing, but officials don’t yet know whether those unaccounted for are elsewhere.

“These fires will take lives and they will cause injuries, and we have to do the best we can, because we are really in a battle with nature, that nature is more powerful than we are,” Brown said.

Authorities flooded with requests for evacuation assistance could not rescue the disabled woman who called for help Saturday evening. The flames prevented deputies from reaching her subdivision, and rescue workers found her body when the fire subsided, Lake County Sheriff’s Lt. Steve Brooks said.

Her name hasn’t been released pending notification of relatives.

The fire exploded in size within hours as it chewed through brush and trees parched from four years of drought, destroying 400 homes, 2 apartment complexes and 10 businesses since igniting Saturday, Cal Fire spokeswoman Lynn Valentine said.

Crews have gained little control of the 95-square-mile blaze, which also damaged water distribution facilities and a massive complex of geothermal power plants known as the Geysers.

Residents fled from Middletown, a town of more than 1,000 residents, dodging smoldering telephone poles, downed power lines and fallen trees as they drove through billowing smoke. Several hundred people spent Sunday night at the Napa County Fairgrounds and awoke to a breakfast of eggs, bacon, and doughnuts.

Evacuees milled around eating, picking up donated clothing and walking their dogs. Nancy O’Byrne, 57, was evacuated from her home in Middletown, but it’s still standing.

“I am very, very, very lucky. I have my house,” she said, her dog Nellie at her side.

Still, she was worried, as people pitched tents and parked RVs everywhere.

“This place is getting steadily fuller,” she said surveying the fairgrounds.

Michael Alan Patrick, 53, had been there since Saturday and lost his house in the blaze. When it broke out, he had been sitting in a park with his friends.

“It was like looking through a tunnel. You could see the flames coming,” he said. “There was this big old pine tree, it lit up and it went whoosh and it was gone.”

Whole blocks of houses have burned. On the west side of town, house after house was charred to its foundations, with only blackened appliances and twisted metal garage doors still recognizable.

“There are communities now, for example, Cobb, that have almost been 100 percent decimated,” Cal Fire Chief Ken Pimlott said.

Four firefighters who are members of a helicopter crew suffered second-degree burns during the initial attack on the fire. They remained hospitalized in stable condition.

The governor declared a state of emergency Sunday to free up resources. He had already declared an emergency for the separate 111-square-mile wildfire about 70 miles southeast of Sacramento.

“The fires, once they start going, they start becoming very difficult to deal with and very expensive. … We are going to have to make available increasing amounts of money,” Brown said Monday.

Ghilarducci, said this summer’s fires are the most volatile he has seen in 30 years of emergency response work. The main cause is dry conditions from the drought.

Lake County saw devastation in just the last two months. In late July, a wildfire east of Clear Lake destroyed 43 homes as it spread across 109 square miles. As firefighters drew close to surrounding that blaze, another fire erupted several miles from the community of Lower Lake on Aug. 9.

Residents in the area had to evacuate from their homes two times in as many weeks.

East of Fresno, the largest wildfire in the state marched away from the Sierra Nevada’s Giant Sequoia trees, some of which are 3,000 years old, fire spokesman Dave Schmitt said. The fire, which was sparked by lightning on July 31, has charred 211 square miles and was 36 percent contained Sunday, the U.S. Forest Service said.

Firefighters have maintained a precautionary line around Grant Grove, an ancient grove of Giant Sequoia trees, and set prescribed burns to keep the flames from overrunning it. The grove is named for the towering General Grant tree that stands 268 feet tall.