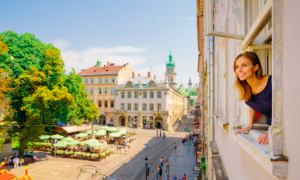 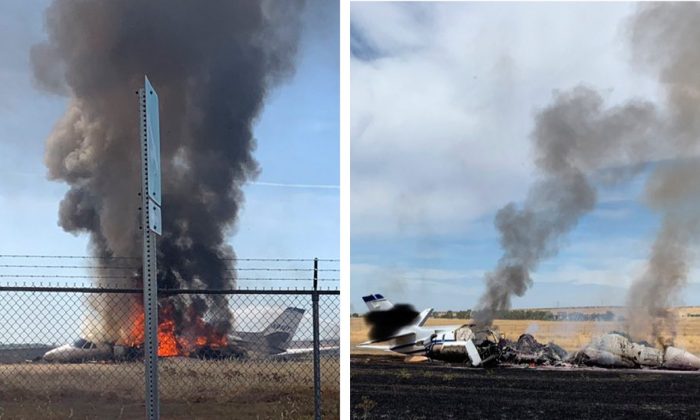 A jet burst into flames after aborting a takeoff on Aug. 21, 2019, in Oroville, Calif. (California Highway Patrol via AP)
US News

OROVILLE, California—All 10 people aboard a small jet escaped injury on Wednesday, Aug. 21, after the aircraft aborted its takeoff at a small Northern California airport, went off the runway and burst into flames, officials said.

The plane was carrying two pilots and eight passengers, and “all were accounted for, no injuries,” said Joe Deal, Oroville’s fire and police chief.

The jet had complications during takeoff that resulted in its catching fire, he said.

It slid off the end of the runway, sparking a fire in dry grass.

In a video from a witness posted by Air Plus News on Twitter, it shows the jet’s door open and its landing gear apparently retracted.

Officials have confirmed the aircraft that caught fire was operated by Delta Private Jets.

Officials briefly closed nearby Highway 162 before controlling the grass fire at less than two acres.

“They were out of the plane quickly,” said Rick Carhart, a spokesman the CalFire/Butte County Fire Department that assisted at the scene.

By the time the first fire engine arrived, “the people had already gotten off and vacated the area very quickly.”

Carhart said he didn’t know if the jet caught fire before or after it left the runway.

The plane was flying from Oroville to Portland International Airport in Oregon, Gregor said.

An FAA website says the model 560XL jet was manufactured in 2003 and is registered to Jotts LLC, with an address that tracks to a firm based in Wilmington, Delaware, that provides registered agent services to multiple companies.

Deal said it was a personally chartered jet, and its corporate passengers had stayed overnight in Oroville.

“It was attempting to take off, but early reports show that it never made it off the ground,” Deal said. The jet slid off the northern end of the runway onto a grassy area, but it never left the airport property. It was fully engulfed by the time firefighters arrived.

Firefighters were able to quickly control the grass fire, but it took more than an hour to extinguish the jet, partly because it had just taken on 400 gallons of jet fuel, he said. A crash truck from nearby Chico sprayed the jet with foam to help extinguish the blaze.

The airport, which does not have commercial flights, remained open.

The FAA and National Transportation Safety Board will investigate. It typically takes the NTSB a year or more to determine a probable cause of an accident, Gregor said.