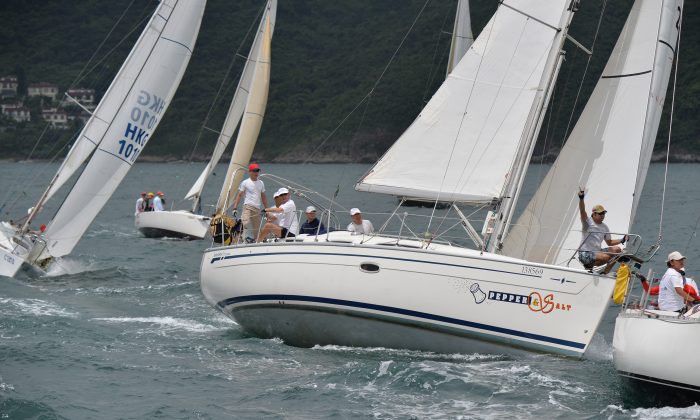 “Mojito”, “Goddess” and “Stingray” had a cozy three boat contest in the IRC division with both races finishing in that order. “Mojito”, winner of the 2014 IRC division-B Typhoon Series had two comfortable, 4-minute wins over competitor boats.

The HKPN races were more hotly contested with different boats taking the 1, 2, 3 positions in the two races. “Pepper & Salt” won the first race, followed by “No One Else” and “Kyte” but newcomer “Zulfiqar” moved from 8th in race-1 to win race-2, followed by “Ichiban” and “Bits & Pieces”. “Pepper & Salt” finished the day on 5-points, 1-point clear of “Ichiban” but 3-boats “Zulfiqar”, “Kyte” and double line-honours winner “Bits & Pieces” are all on 8-points.

This is just day-1 of 4-race days and with 2-discards allowed after completing 7 or 8 races all boats are still in the title race.

Next Races
The RHKYC Top Dog series starts this coming weekend with the Lipton Trophy pursuit race on Saturday Nov 15 and the Around the Island Race on Sunday No 16. The next Winter Saturday race-day is on Nov 20, 2014.