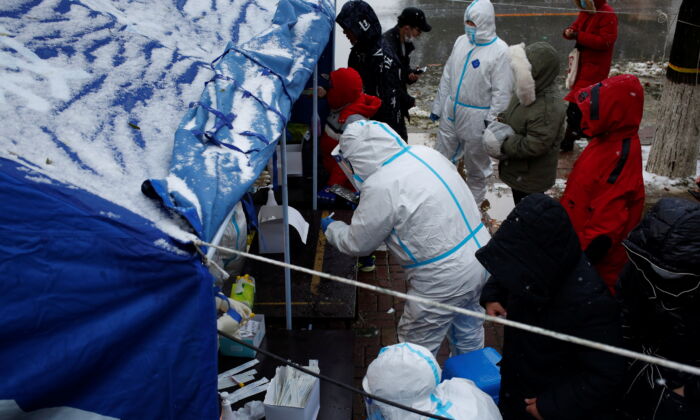 People line up for nucleic acid testing in the snow at a testing site in Dalian, Liaoning province, China, on Nov. 8, 2021. (cnsphoto via Reuters)
INSIDE CHINA

Efforts to curb a growing COVID-19 cluster have reached new heights in China’s northeastern port city after national authorities’ on Thursday ordered the virus be zeroed out more quickly.

“Various measures should be quickened … in order to get the outbreak under control in a shorter amount of time,” the National Health Commission said on Nov. 11.

Local authorities in Dalian city of Liaoning Province had responded strongly to the latest flare-up, with schools from kindergartens to universities halting offlines lessons, starting a second round of mass testing campaign, and closing off infected areas.

On Nov.12, Dalian city called on its residents not to leave their homes unless necessary and announced new punishments for people who leave sealed-off residential compounds.

“[Residents who are isolated at home] should cooperate with relevant departments to install surveillance cameras, adding magnetic sensors [to doors], sealing [doors] with paper strips, and other means to ensure they stay at home,” Dalian authorities said in a Friday notice.

Anyone who goes out without authorization will be punished, and other residents in the same apartment building will restart a 14-day quarantine, read the notice. Meanwhile, anyone found not complying with the regulations would have their infraction added to their social credit record. The social credit system gives each Chinese citizen a score. A low social credit score can mean that an individual cannot fly on a plane or use a train.

Despite doubling down on efforts against the CCP (Chinese Communist Party) virus, the high transmissibility of the Delta variant has seen a rise in infections. Dalian reported 57 locally transmitted cases on Friday, 34 in a college town.

While the figure is likely to not reflect the true total—given the Chinese regime is known to grossly under-report its virus numbers—the official counts of infections in Dalian are still higher than that of any other Chinese city.

“Various measures should be quickened and their quality should be improved, in order to get the outbreak under control in a shorter amount of time,” the National Health Commission said on Nov.11, citing a meeting chaired by the commission’s director in Dalian.

The number of people traveling out of Dalian has dropped by 96.5 percent to 918 per day on average, a local transportation official said late on Thursday. The city of 7.5 million people has imposed curbs on public transport and issued three notices in five days warning residents against leaving Dalian for unnecessary reasons.

Meanwhile, more than 20,000 students and staff from two universities in Zhuanghe college town have been sealed in dormitories since three workers of a college dining hall tested positive on Nov.4, according to notices on the schools’ official website.

“[I’ve] no idea when the lockdown will be lifted, [I] have to wait for the government’s notice,” said a teacher from the Art and Engineering Information College of Dalian Polytechnic University.

Online videos and photos show students living in a dormitory building were sent to centralized quarantine overnight after several tested positive for the virus on Nov. 10.

The Health Commission of Zhuanghe city and Dalian city didn’t answer the call from The Epoch Times to seek comment.

Dalian, a leading port for seafood shipments as well as fruit and some meat, has also ordered all businesses handling imported chilled and frozen foods to suspend operations, according to the state-backed newspaper Global Times.