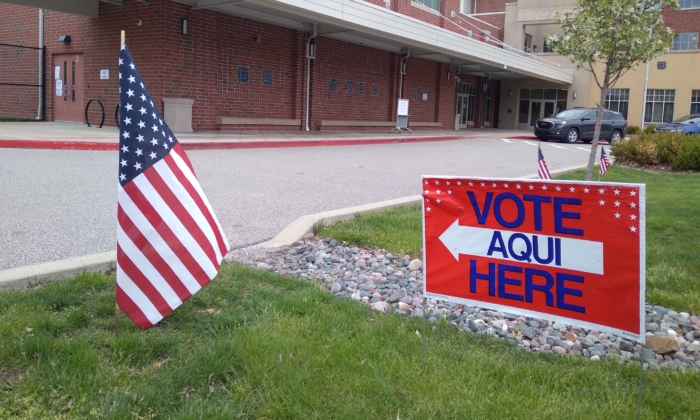 The voter turnout early in the day for the May 3 Primary Election was slow and low in northeast Ohio, according to poll workers. Here signs guide voters into Lincoln School in Lakewood, a large West Cleveland suburb.(Michael Sakal/The Epoch Times)
Politics

WESTLAKE, Ohio—Just 41 of the precinct registered voters had cast their ballots during the steady rainfall in this west Cleveland suburb when the turnout numbers were posted at 11 a.m. on May 3 at Westlake City Hall.

Republican balloting slightly led Democrats ballots cast, 15 to 13. Independents cast 13 ballots, according to the numbers released by the Cuyahoga County Board of Elections workers.

“This is one of our smaller precincts and normally, during a primary, we may have about 100 to 150 turn out to vote. For a presidential election, we may double that, to about 300.”

Westlake is a conservative, Republican-leaning city west of Cleveland, and two cities away from Lakewood, a Democratic stronghold that borders Cleveland.

A woman named Susan, coming out of the polls at Westlake City Hall told The Epoch Times that she was a Republican and always voted in elections.

“Every election is important, and if you want to change, this is the time to do it or at least try for it,” she said. “There’s too much going on not to get out and vote.”

Susan, who is retired, said she was supporting Mike Gibbons for the U.S. Senate, and Jim Renacci for governor, who is running against Gov. Mike DeWine (R).

“I think we lost too much during the COVID pandemic because of the way things were handled during the shutdowns,” Susan said. “A lot of businesses closed, and I believe our freedoms were infringed upon.

“Now, we have the high price of gas going back up to more than $4 a gallon again, the price of groceries is atrocious and the Democrats are overspending.

“I believe Mike Gibbons will be conservative with spending like he said he would, and wants to help put stronger immigration laws in place when our border is in chaos. This can’t go on.”

A man named Steve, who was going into Westlake City Hall also said he was voting Republican because of the way things were.

Growing up in northeast Ohio, he said his parents were Democrats, but in the past few elections, they saw that the party was drastically changing.

“I think Mike DeWine has been in political office, well offices, long enough,” he said. “Jim Renacci is a businessman, he’s from northeast Ohio, and our area needs to have someone with a more conservative point of view in the office.

“Inflation is through the roof,” he added. “Whenever I go to the grocery store, I now find myself looking at the price of everything, even if it’s on sale—and it’s still high.”

For the Senate, Steve said he supports J.D. Vance.

“I hope J.D. Vance wins the Senate, and Republicans can start getting back control of the House and Senate,” Steve added.

“That’s all you seem to hear on the news. I can identify with him. He’s a family man with young kids, and we need to make sure we vote to protect our freedoms and hopefully preserve our way of life for future generations.

“Things have changed so much for the worse since Donald Trump left office, it’s scary. You wonder where it’s all going to end.”

At Lincoln School in Lakewood there were a large number of Democrats who cast their ballot and voiced their point of view at Precincts 02-A and 02-C.

By 11 a.m., there had been 128 ballots cast by the precinct’s 1,010 registered voters. Of those ballots cast, 87 were Democratic, and 21 were Republican. The other 20 were Independents, according to the information released by poll workers there.

Some of them believe that inflation, high gas prices, border security, and Russia’s ongoing invasion of Ukraine are more global issues that are out of the control of the average citizens.

Paul Plank, a retired insurance agent and 50-year Lakewood resident, said he had been a lifelong Republican until the past two presidential elections because of what has happened in the Republican Party.

Although Plank is not in favor of abortion, he said he would not want to see it completely criminalized so women would not have it as an option.

He also believes in reasonable restrictions when it comes to owning guns such as bump stocks to upgrade a gun to an automatic weapon.

“I am voting Democrat and supporting Nina Turner for Congress. If Matt Dolan [the Republican for Senate] wins, I think he’s the only Republican moderate enough to get anything done. I have no use for [Josh] Mandel or [J.D.] Vance. they’re too polarizing like Jim Jordan.

However, for governor, Plank said he would vote for Mike DeWine, incumbent and one of four Republican candidates. The two Democrats running are former Cincinnati mayor John Cranley and former Dayton mayor Nan Whaley.

Plank went on, “As for the governor, I like Mike DeWine. I think he did a good job of attracting investment to Ohio. When it came to COVID, he followed the science, or what was appropriate at the time. At least in the Republican party, Dewine took a pretty courageous stand.”

Plank said that he supports Nina Turner for Congress over Shontel Brown because he believes she would do a better job legislating and is more moderate.

“Nina Turner is a little further to the right than she should be, and Shontel Brown is pretty far left in a lot of her views.”

The sentiments of Mike Pella, a 25-year resident of Lakewood, echoed Plank’s.

On coming out to vote in the primary, Pella told The Epoch Times. “I think every election is extremely important, especially on the local level.

“In primaries that often are overlooked, it’s important to get out and vote for the candidates and issues—and I’m voting Democrat. I vote for people who I think are going to win and do a good job.”

“I’m all for everything that the left stands for,” added Pella, 71, who is semi-retired but works with students at Cuyahoga County Community College in Cleveland on media and video production.

“I don’t think the economic issues such as inflation or high gas prices are controllable by the voters,” Pella added.

“They are global issues and out of our control. Like-minded people must get out and vote, especially in the primaries so we can preserve the way of life we have come to like.”

Lastly, Susanna, a retired schoolteacher who has lived in Lakewood for 44 years, told The Epoch Times she has always voted Democrat because that’s the party her parents always voted for.

“I look at these Republicans who say, ‘Oh, I’m for Trump,” and I think I could never vote for them,” she said.

“As far as inflation and high gas prices, those have gone up because of Russia’s president Vladimir Putin,” Susanna added. “What can you do about all of that?”

Susanna said she could never vote for Nina Turner for Congress and is voting for Shontel Brown.

“When I was a schoolteacher, Nina Turner didn’t support Cleveland schools,” Susanna said.

“She said she wanted to get rid of all the district’s leaders. I didn’t agree with that. Every election is important, and that’s why I’m here. I want to make sure I vote for good candidates.”