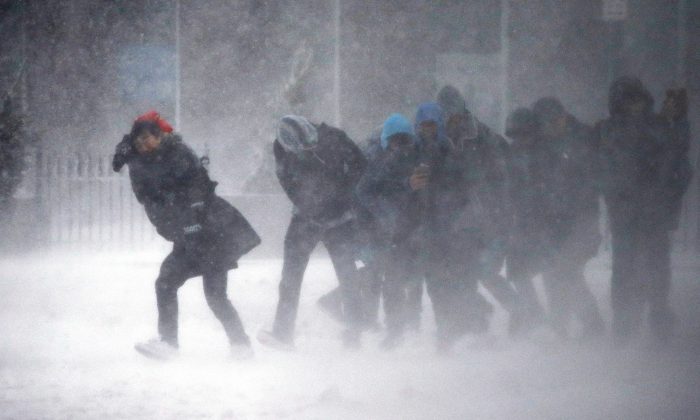 People struggle to walk in the blowing snow during a winter storm in Boston on March 14, 2017. (AP Photo/Michael Dwyer)
New York

NEW YORK—Plunging temperatures ushered in by the storm that plastered the Northeast turned the snow and sleet into rock-solid ice, leaving roads and sidewalks treacherous Wednesday and making shoveling seem like hard labor.

Tuesday’s powerful nor’easter paralyzed much of the Washington-to-Boston corridor, but fell short of the predicted snowfall totals in New York, Boston and Philadelphia.

The storm, which followed a stretch of unusually mild winter weather, dumped 1 to 2 feet in many places, grounded more than 1,000 flights Wednesday after 6,200 flights were canceled a day earlier. It also knocked out power to nearly a quarter-million customers from Virginia northward.

By the time it reached Massachusetts, it had turned into a blizzard, with near hurricane-force winds gusting to over 70 mph along the coast. Boston ended up with 6.6 inches of snow, far less than what was predicted.

Boston canceled school for a second day Wednesday to allow time for cleanup efforts. Mayor Marty Walsh said he made the call out of “an abundance of caution.”

The storm was easily the biggest in an otherwise merciful winter that had mostly spared the region. Many, like retired gumball machine technician Don Zimmerman, of Lemoyne, Pennsylvania, weren’t happy.

“It’s horrible,” Zimmerman said, using a snowblower to clear the sidewalk along his block. “I thought winter was out of here. … It’s a real kick in the rear.”

While most people heeded the warnings to stay off the roads, police said a 16-year-old girl was killed when she lost control of her car on a snowy road and crashed into a tree in Gilford, New Hampshire.

In East Hartford, Connecticut, an elderly man died after being struck by a snow plow truck. And, in Longmeadow, Massachusetts, a public works employee was killed after the snow plow he was driving was hit by an Amtrak plow train clearing tracks.

The storm was on track to be one of the biggest on record for Burlington, Vermont, which got 25.6 inches of snow as of Wednesday morning, with another 2 to 5 inches due by the end of the day. About 70 miles to the northeast, Jay led the way with 34 inches.

Philadelphia and New York City got anywhere from a few inches of snow to around half a foot before it switched over to sleet. Forecasters had predicted a foot or more. In New Jersey, which saw rain or just a little snow, Gov. Chris Christie called the storm an “underperformer.”

Inland areas, meanwhile, got hit hard. Harrisburg, Pennsylvania, and Worcester, Massachusetts, received a foot or more of snow. The Binghamton, New York, area got over 2 feet, while Vernon, New Jersey, had at least 19 inches.

The storm came just days after the region saw temperatures climb into the 60s, and less than a week before the official start of spring.

In the nation’s capital, non-essential federal employees were given the option of reporting three hours late, taking the day off or working from home. The city got less than 2 inches of snow.

A few days ago, workers on Washington’s National Mall were making plans to turn on the fountains.

“Obviously all that has to come to an abrupt stop until we get all the snow cleared,” said Jeff Gowen, the acting facility manager for the National Mall and Memorial Parks. “The cherry blossoms, they’re right on the cusp of going into bloom here. I had a feeling this was going to happen.”

As the storm closed in, the National Weather Service used terms like “life-threatening” and urged people to “shelter in place,” language that has come to be associated with mass shootings. In the end, the line between snow and rain shifted slightly to the west, sparing some of the Northeast’s big cities.

Government meteorologists realized by late Monday afternoon that there was a good chance the storm wasn’t going to produce the giant big-city snow totals predicted. But they didn’t change their forecast for fear people would mistakenly think the storm was no longer dangerous, said Greg Carbin, chief of forecast operations at the Weather Prediction Center.

In Narragansett, Rhode Island, high winds buckled a state-owned wind turbine. In New York City, two homes under construction collapsed near the waterfront in Far Rockaway. No injuries were reported.

And two ponies broke out of their stables and roamed the snowy streets of Staten Island until an off-duty police officer wrangled them with straps normally used to tow cars and tied them to a lamppost. They were taken back to the stables.

The storm coincided with New Hampshire’s Town Meeting Day, a Yankee tradition in which voters in more than 100 communities elect local politicians and set budgets.

Some towns postponed the meetings because of the snow. But in Hopkinton, a steady stream of voters braved the blustery conditions.