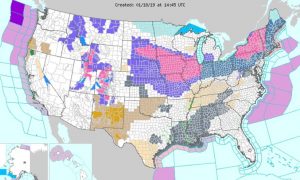 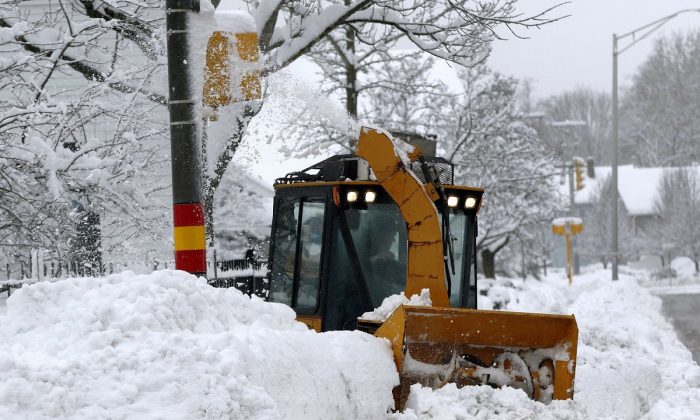 A city employee clears a sidewalk after an overnight snowstorm dropped nearly a foot of snow in Marlborough, Mass.,on March 4, 2019.(AP Photo/Bill Sikes)
US News

NEW YORK—A late winter storm dropped more than a foot of snow on parts of the northeastern United States overnight—prompting school closures across the region, knocking out power to thousands and slowing the Monday morning commute to a crawl.

The storm, which hit the hardest in the early morning hours of Monday, March 4, dumped more than a foot of fresh snow on a large swath of New England, hitting some areas that had gotten off relatively unscathed for most of the winter.

The National Weather Service’s Boston-area office says as of Monday morning, areas to the west and south of the city received the most snow, with 16 inches in Sharon, more than 15 inches in Weymouth and Foxborough, and 14 inches in Framingham and Natick, according to unofficial measurements.

Pomfret, Connecticut, had 16 ½ inches and Burrillville, Rhode Island, got 17 inches.

A late winter storm dropped more than a foot of snow on parts of the northeastern U.S. overnight — prompting school closures across the region and knocking out power to thousands https://t.co/qAmBbIQhz6 #10TV

A slushy snow totaling 5 inches fell in New York City’s Central Park, on the low end of what was forecast, but enough for Mayor Bill de Blasio to close schools and suspend alternate-side street parking rules.

Hundreds of schools throughout the country were closed or delayed because of the storm. In parts of Nebraska, dangerously cold temperatures prompted school and business closures as wind chill temperatures as low as 40 below zero are expected Monday. A weather service wind chill warning extends through 11 a.m.

As of early Monday morning, thousands of people were also without power due to the heavy, wet snow including nearly 60,000 customers throughout New England.

The storm may have contributed to the death of two teens in a single-car accident about 30 miles north of Philadelphia Sunday evening. The driver, a 17-year-old, was hospitalized.