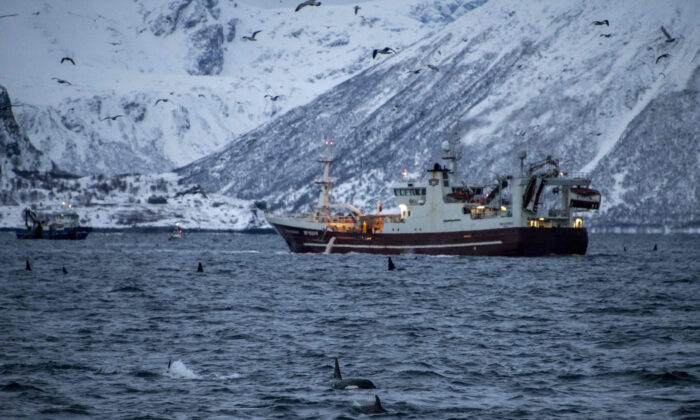 Killer Whales follow a trawler in the fjord of Skjervoy, northern Norway, on Nov. 22, 2021. (Olivier Morin/AFP via Getty Images)
UK

The UK has come to an agreement with Norway and the European Union over how to divide up fish stocks in the North Sea next year.

While fishing groups have welcomed the accord, catch-sector bosses say it does nothing to resolve issues around access to cod-rich Norwegian waters after bilateral talks in the spring between London and Oslo to agree reciprocal rights this year collapsed.

Ministers say they “remain optimistic” a deal with Norway and the Faroe Islands for 2022 can be struck before Jan. 1.

The announcement of a trilateral agreement between Britain, Brussels, and Norway on catch limits means that all three know what share—known as “total allowable catch”—of six jointly-managed fish stocks they can take from the North Sea in 2022.

The UK government said the agreed catch levels will provide opportunities estimated to be worth around £190 million ($252 million) to the fishing industry, based on historic landing prices, and argued it will provide certainty heading into the new year.

The deal will see UK cod quota rolled over, with haddock up 5 percent, herring rising by a fifth, while whiting will increase by a quarter compared to the 2021 allocation.

However, plaice will see a 12 percent reduction in allowed catch and saithe will be down by 24 percent on last year.

Industry insiders said the UK quota for plaice is so large, however, that the reduction is unlikely to have a detrimental financial impact.

Fisheries minister Victoria Prentis said: “We are confident that this agreement has struck a balance that will benefit both our fishing industry and ensure our marine environment is healthy and viable long into the future.”

The Scottish Fishermen’s Federation said the UK had experienced the post-Brexit benefit of “being at the negotiating table in its own right” when it came to agreeing catch limits on “some of Scotland’s most important commercial stocks.”

A spokesman for the organisation said, with stock management agreed, it was time to “move forward with the bilateral discussions with our neighbouring coastal states about fishing opportunities and access arrangements for the year ahead.”

Jane Sandell, chief executive of UK Fisheries, said the three-way agreement would not resolve the problem around the lack of access to Norwegian waters.

UK Fisheries was forced to tie up its supertrawler the Kirkella—which previously caught around 10 percent of all the fish sold in the UK’s chip shops—after post-Brexit fishing talks with Norway collapsed in April regarding reciprocal access to each other’s waters in 2021.

Under an agreement enjoyed while the UK was an EU member, the Kirkella had been able to access quotas from the Faroe Islands, Greenland, and Norway to source haddock and chips for domestic fryers.

Sandell told PA news agency that without bilateral deals in place, UK Fisheries had lost 60 percent of its business.

“All this trilateral agreement does is set quotas, so it is good there is an agreement, but in terms of actual fishing opportunities it doesn’t get us anywhere further,” she said.

“We’ve got 40 percent of the fishing opportunities this year that we had last year.”

Asked whether that downturn had impacted staff numbers, she added: “Absolutely, of course.

“We’re trying to make sure we can keep as many people as possible but it just doesn’t work out, does it?”

The fisheries minister, in an update to MPs on Friday, said annual negotiations with Norway and the Faroes were “ongoing.”

Prentis added: “We are continuing to discuss possible exchanges of fishing opportunities with Norway and the Faroes.

“If there are agreements to be reached, of which we remain optimistic, we hope to conclude them in the next few weeks.”