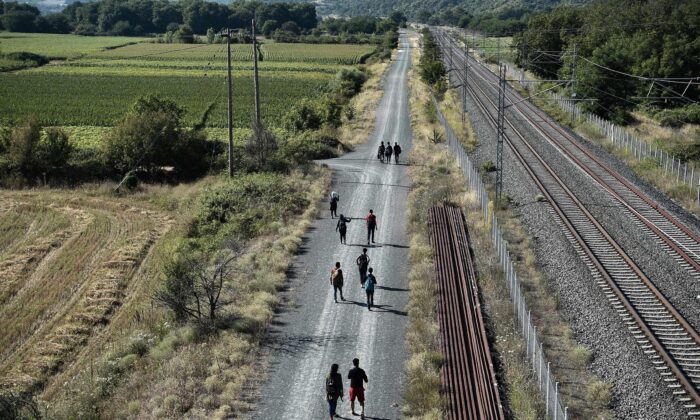 Migrants walk along rail tracks near Idomeni at the border between Greece and North Macedonia, on July 16, 2020. (Sakis Mitrolidis/AFP via Getty Images)
Europe

SKOPJE, NORTH MACEDONIA—Police in North Macedonia have discovered 41 migrants, including five children, in a routine police check on the country’s main highway and arrested the van’s driver.

Police said in a statement Saturday that their patrol stopped the van in front of a toll station late Friday near the central town of Negotino. In all, 41 migrants from Cuba and India were discovered packed into the van.

Police arrested the 20-year-old van driver, a Serb citizen identified only by his initials as F.R.

The migrants were transferred to the main migrant shelter in the southern border town of Gevgelija. They are believed to have entered North Macedonia illegally from Greece and will be deported back.

This is a second large group of migrants discovered in North Macedonia in the last six months.

The small Balkan country was once a main route for illegal migrants seeking to slip into wealthier countries in Europe. But with COVID-19 pandemic and strict border controls over the past year, Albania has now become a more desired destination for migrants trying to slip in from Greece.