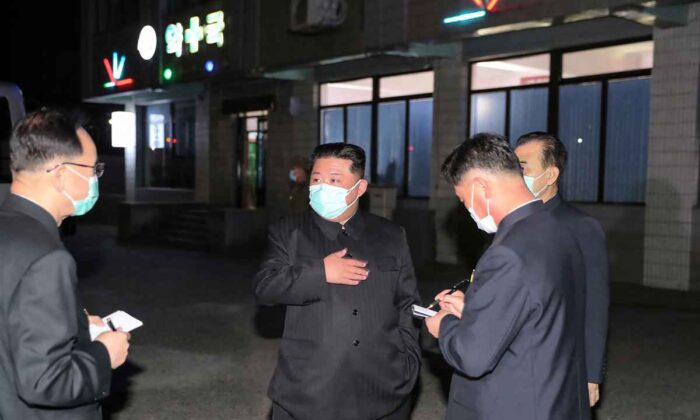 As North Korea combats its first official COVID outbreak, its state-run Korean Central News Agency (KCNA) on May 15 broadcasted a two-minute video featuring a doctor from Pyongyang explaining how to treat COVID symptoms and prevention methods.

The video said that most people who contacted the Omicron variant would likely experience mild symptoms and require only outpatient care or treatment at home while urging those who experience more severe symptoms to seek medical attention.

It also showed the proper way to wear masks and wash hands, as well as social distancing, disinfecting, and gargling with salt water. But vaccination was not mentioned. The doctor said that the fever usually lasts around three days and encourages treatment at home, adding that good rest is essential.

A Chinese doctor named Hao Xichun summarized the video and posted it on the Chinese microblogging site Weibo on May 15, adding some of his comments and recommendations.

The post immediately gained traction and support on Weibo, fuelling discussions on many Chinese platforms.

A Weibo user commented that the North Korean approach is “scientific and common sense,” while another suggested that Beijing’s methodology “creates panic and promotes lockdowns.”

Hours later, Hao’s post and webpage were removed from Weibo.

On the same day, KCNA released another public health video, titled “Knowing Omicron,” introducing more information about the virus and how to deal with it in the form of animation, Hong Kong news portal HK01 reported.

The video said the fatality rate of someone who contracted the Omicron variant is 75 percent lower than that of the Delta variant. Meanwhile, it said 93 percent of those infected have mild symptoms, requiring only outpatient care or treatment at home, adding that it usually takes five days to recover and that it does not recommend taking excessive medication.

Related videos or posts have largely been removed or blocked on major Chinese platforms. However, a few user-uploaded videos are still available for playback at the time of this reporting.

In a YouTube video, Chinese current affairs commentator “Dakang” said that the North Korean public health videos did not deliberately downplay the pandemic or create panic. He said the videos conveyed some important information truthfully to its people—the opposite of what China is doing as the Chinese Communist Party (CCP) uses scaremongering tactics to push its “dynamic zero-COVID policy,” which involves mass testing and strict quarantine measures to stamp out an outbreak of the CCP virus before it can spread.

For over a month now, since April 5, Shanghai—a city of about 26 million people best known as a financial and trade hub of East Asia for more than a century—has been in total lockdown. The draconian measures have led to growing cries from residents voicing hardships, including no access to medical care and COVID-positive children being separated from their parents and sent to quarantine facilities. The local people are struggling from the shortage of food and supplies, and access to other basic necessities.

Miao Xiaohui, a prominent infectious disease expert in Shanghai, called on Beijing to stop the “zero-COVID” policy, saying it “is completely inconsistent with the basic law of infectious disease pandemics.” In his April 23 social media post, he urged the authorities to immediately end the lockdowns to prevent further disasters and deaths caused by harsh pandemic measures. Meanwhile, some community residents protested against the lockdowns, demanding basic necessities.

Most Chinese state-run media have published articles on why Beijing insists on clearing the CCP virus. The main talking points include the country’s massive population, unbalanced regional development, insufficient medical resources, and a low vaccination rate. Those articles said if China chose to coexist with the virus, it would potentially run out of medical and health resources, seriously impacting its economy.