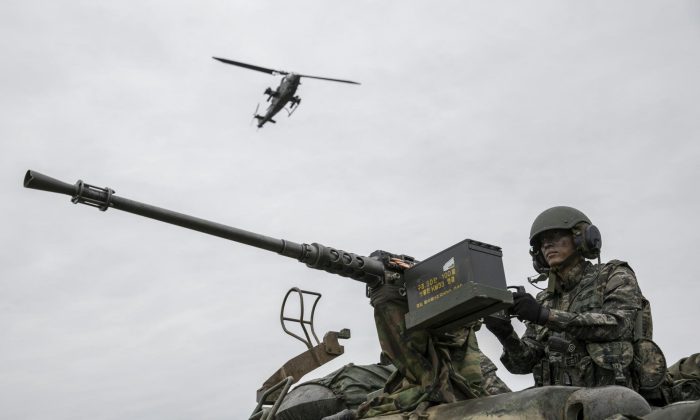 South Korea’s military fired three warning shots using a 40-millimeter gun to ward off the North Korean patrol vessel, which traveled just over half a mile south of the maritime border before retreating.

The North Korean fishing boat was towed to South Korea’s Baengnyeongdo island for inspection, where the military discovered seven unarmed North Koreans aboard, six of whom were wearing military uniforms.

The seven North Koreans told the military that their ship accidentally veered into South Korean waters while transporting materials for relocation, and that they had no intention of defecting to South Korea.

The military added that South Korea’s government has communicated with the North Korean authorities about the border crossing incident through commercial and military communication lines.

North Korea’s state media did not issue a statement following the border-crossing incident.

The incident occurred ahead of the March 9 presidential election in South Korea, and just days after the North Korean regime carried out an “important test” for a spy satellite.

An unnamed government official confirmed to YNA that South Korea is working closely with the United States and the IAEA to monitor North Korea’s missile activity at Yongbyon nuclear complex, though the official stated that there had been no significant activities at the site.

South Korea has been pushing for a declaration to end the 1950–53 Korean War, which ended in an armistice, to ease tensions on the Korean Peninsula. But North Korea insists that any formal treaty to end the war must first be preceded by an end to the United States’ “hostile policies.”

Earlier this year, South Korea’s military claimed that a North Korean defector was spotted crossing the Military Demarcation Line into North Korea. The man, who appeared to be in his 30s, had climbed the barbed wire fence and entered the demilitarized zone.

The South Korean military surveillance footage showed that the man appeared to be the same defector who entered South Korea via an eastern front-line route in November 2020.