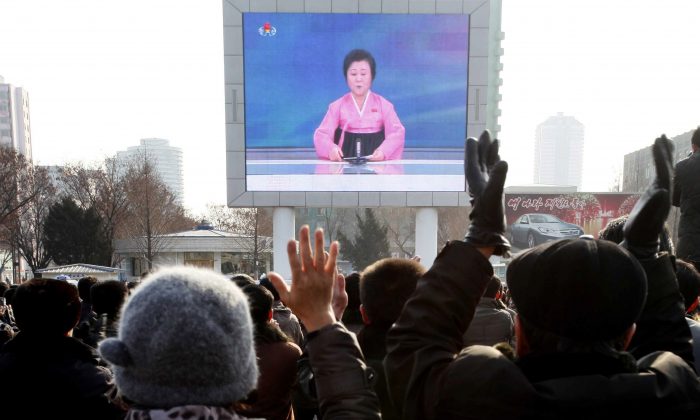 North Koreans watch a news broadcast on a video screen outside Pyongyang Railway Station in Pyongyang, North Korea, on Jan. 6, 2016. Pyongyang has long claimed it has the right to develop nuclear weapons to defend itself against the U.S., an established nuclear power with whom it has been in a state of war for more than 65 years. But to build a credible nuclear threat, the North must explode new nuclear devices—including miniaturized ones—so its scientists can improve their designs and technology. (AP Photo/Kim Kwang Hyon)
Asia & Pacific

WASHINGTON—North Korea’s claim to have detonated a thermonuclear weapon in an underground test has raised worldwide worry about what really happened, whether the isolated nation is closer to being capable of hitting the U.S. mainland with a nuclear missile, and whether it brings war closer.

Some questions and answers about what the Pentagon called an “unacceptable and irresponsible provocation” that threatens peace in Asia.

A. The weapon test, if confirmed, could mean North Korea is on a path to possessing a bomb of far greater destructive power than the types it detonated in three previous underground tests, in 2006, 2009 and 2013. So if the North Koreans were to field such a weapon, known as a thermonuclear or hydrogen bomb, then it could raise the stakes in a long-running struggle to reunite the Korean peninsula under its own terms. That, in turn, would force tough decisions on the United States, which has a treaty obligation to defend South Korea — with nuclear weapons if necessary.

On the other hand, North Korea is believed to already possess a number of atomic bombs and is developing longer-range missiles to deliver nuclear warheads.

A. That’s a possibility. White House press secretary Josh Earnest said Wednesday that early U.S. analysis of the underground explosion is “inconsistent” with the North’s announcement that it conducted a successful hydrogen bomb test. Private analysts also expressed doubts about Pyongyang’s declaration. Anthony Cordesman, a defense expert at the Center for Strategic and International Studies, said the North might have tested an enhanced atomic weapon, rather than a hydrogen bomb, as a means of celebrating the rule of its leader, Kim Jong Un.

Q. What’s the difference between an atomic bomb and a hydrogen bomb?

A. In technical terms, the difference lies in the manner in which they release energy. An atomic bomb uses nuclear fission, or the splitting of atoms, to create its energy. Hydrogen bombs use fusion, in which atoms are combined rather than split. The “H bomb” actually is a two-stage device that uses the implosion of a “primary” fission device of plutonium or highly enriched uranium to set off a “secondary” fusion component fueled with hydrogen isotopes. Details of the hydrogen bomb design are highly classified by the U.S. government.

A hydrogen bomb is vastly more powerful than an atomic bomb. Robert Norris, a nuclear historian, makes this illustrative comparison: The American atom bomb dropped on Hiroshima, Japan, in August 1945 had a yield of about 15 kilotons, whereas a “starter” hydrogen bomb is 1,000 kilotons.

Q. How can the U.S. tell whether North Korea did test a hydrogen bomb?

A. The U.S. and the international community have a variety of means of analyzing an underground explosion, including seismometers that measure ground motion. Also, the U.S. Air Force operates aircraft specially equipped to detect tell-tale airborne signs of a nuclear explosion, and it operates a global network of nuclear event detection equipment called the U.S. Atomic Energy Detection Systems, which can detect nuclear activity underground, underwater, in the atmosphere or in space.

Q. Is it reasonable to think the North Koreans could have graduated to the technical skill required to build a hydrogen bomb?

A. One way of looking at that is to compare how long it took other nuclear powers to move from the atom bomb to the hydrogen bomb. For the United States, which was first in both cases, it took 87 months, or more than seven years, to go from its first atomic bomb test in 1945 to its first hydrogen bomb test in 1952. It took China 32 months, or less than three years, according to Norris. North Korea conducted its first atomic bomb test in 2006, which some think was unsuccessful, followed by a second test in 2009 and a third in 2013. So it has been working on this for at least 10 years.