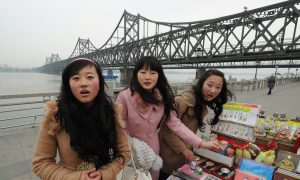 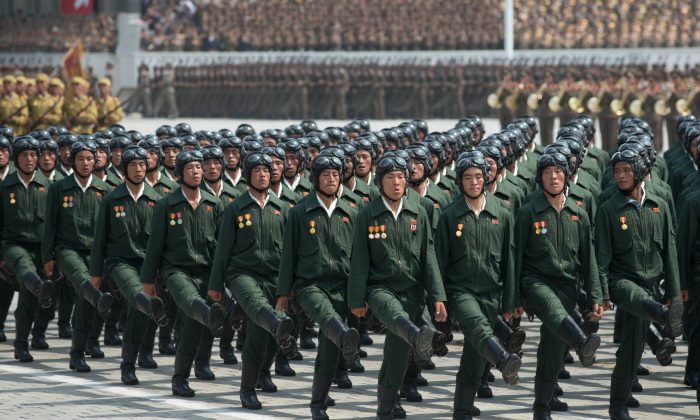 North Korean soldiers march during a military parade past Kim Il-Sung square marking the 60th anniversary of the Korean war armistice in Pyongyang on July 27, 2013. Soldiers marching with backpacks with the symbol for radioactivity on them are said by a Chinese netizen to have been carrying foam boards. (Ed Jones/AFP/Getty Images)
China

A military parade was held in Kim Il Sung Square in the North Korean capital of Pyongyang on July 27 to commemorate the 60th anniversary of the Korean War Armistice. The event prominently featured a unit of troops carrying backpacks marked with the symbol for radioactivity, initially raising concerns that the troops were carrying nuclear weapons, reported the Chosun Ilbo.

However, an unnamed South Korean military source has said that it was extremely unlikely that the backpacks contained actual nuclear weapons. “They (North Korea) probably just want to show that they have completed operational deployment of their nuclear weapons, and have troops capable of deploying them,” the source said. The same unit had previously appeared in a military parade last year wearing the same outfits, but did not carry the marked backpacks then.

On July 29, a Chinese netizen said that he had learned from a friend, who worked at Hunan Golden Peacock Plastics Co., that an ethnic Korean trader from Liaoning Province (in far northeastern China, Liaoning borders North Korea) had ordered 500 rectangular foam boards from the firm at “a pretty high price.”

Each of the boards was molded with a bump on it, and their eventual purpose was unclear. Having seen footage of the North Korean military parade, his friend said that he thought the “nuclear backpacks” looked very similar in size and shape to those foam boards.

The Korean trader had taken away the mold, the friend said, or he could have made replicas of the boards to show him, since they could be produced very cheaply.

Another netizen commented that, judging from pictures of the parade, the “nuclear backpacks” appeared to exert very little weight on the backs of the troops. Had they been actual nuclear weapons, the backpacks should have been much heavier.