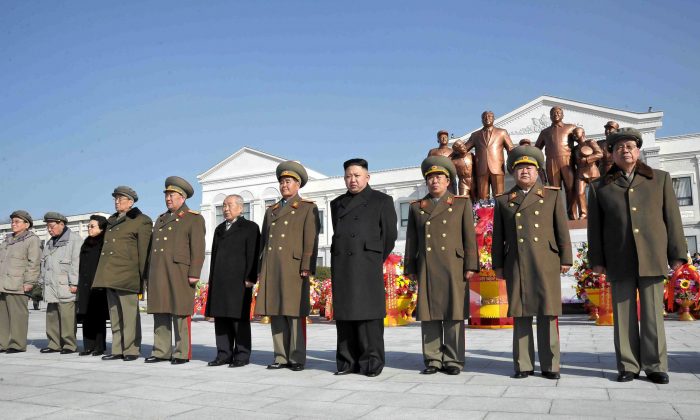 North Korean leader Kim Jong-un (4th R) and senior senior officials from the party, government and army posing before the statues of late leaders Kim Il-sung and Kim Jong-il at Mangyongdae Revolutionary School in Pyongyang as the statues were unveiled on the birth anniversary of Kim Jong-il, on on Feb. 16, 2013. (Korean Central News Agency via Getty Images)
Asia & Pacific

Earlier this year, Pyongyang declared it was suffering the “worst drought in 100 years.” Indeed, North Korea has suffered widespread food shortage since the early 1990s when an estimated 5 percent of its population died of starvation and related diseases. The situation remains dire.

According to the World Development Indicators, 15.2 percent of North Korean children under age five were underweight in 2012. The U.N. Office for the Coordination of Humanitarian Affairs reported in 2015 that the chronic malnutrition rate among children under five years of age was 28 percent.

This long-term food shortage aggravates health conditions. Insufficient nutrition weakens the body’s immune system, making North Koreans more susceptible to infections, such as tuberculosis (TB). According to the North Korean Humanitarian Needs and Priorities 2015 Report, TB is a major public health problem. 2,500 North Koreans die annually from this fatal, infectious disease. The prevalence and incidence of TB in North Korea for 2011 are about three times larger than in South Korea.

Even worse, it is estimated that the spread of multidrug-resistant tuberculosis (MDR-TB), which is more difficult to treat than traditional TB, is much more advanced than previously assumed. North Korea does not have a health system for treating disease like MDR-TB. North Korea had a comprehensive free health care system from the late 1960s until it broke down during the economic crisis of the 1990s. The World Health Organization (WHO) concluded there is a 60 percent shortage in providing vital medicines to vulnerable populations. It is estimated that only 1 percent of the population in the DPRK receives proper free medical service.

North Korea has habitually blamed Mother Nature for its inability to feed its people. The reality is that North Korea’s disastrous economic system and its prioritizing military spending over the needs of its people are to blame. According to United Nations Commission of Inquiry (COI) into Human Rights in North Korea, the regime spent large amounts of its resources on military, luxury goods, and the advancement of the Kim regime’s cult of personality instead of feeding the hungry.

The COI report documented that even at the height of mass starvation, the regime hindered international food aid by imposing conditions that were not based on humanitarian principles. The U.N. report concluded that North Korean leadership was responsible for using food as a means to maintain the regime.

In 2012, North Korea spent $645 million on luxury goods while in 2013 the United Nations World Food Program (WFP) asked donor nations for $150 million to aid North Korea. Moreover, the U.N. estimated that even during the worst famine period, the amount of resources needed to solve the food crisis was approximately $100 million–200 million.

Thoroughly and effectively addressing North Korea’s humanitarian crisis is not possible without a complete reform and replacement of North Korea’s leadership.

Jongtae Kim is currently a member of the Young Leaders Program at The Heritage Foundation. Copyright The Daily Signal. This article was previously published on DailySignal.com.