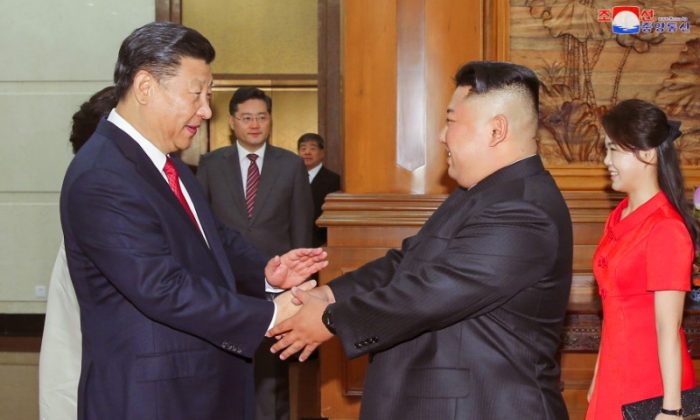 In response, Xi said he would make the “utmost effort.”

Kim’s June visit was his third this year, confirming that the communist allies and major trading partners still relied on their diplomatic ties. It occurred roughly a week after Kim’s historic meeting with Trump in Singapore.

Meanwhile, the Trump administration had continually said it plans to uphold sanctions until denuclearization on the Korean peninsula is fully achieved.

Last week, Trump urged Beijing to continue sanctions efforts and said the border between China and North Korea was “getting a little weaker now.”

U.S. Secretary of State Mike Pompeo told a U.S. Senate hearing this past week that he had seen “modest” backsliding by China.

“We have observed China not enforcing control over their cross-border areas as vigorously as they were six or 12 months ago,” Pompeo said.

Since Kim made his first visit to Beijing in April, activities between the borders have increased. South Korean media reported that busloads of North Korean laborers were being sent to China.

And earlier this year, the U.N. Security Council blacklisted dozens of ships and shipping companies that had smuggled oil and coal to North Korea, including five based in China.

Japan’s Kyodo news agency reported this past week that the Tokyo government has alerted the U.N. about a suspected ship-to-ship transfer incident on June 21 involving a North Korean tanker in the East China Sea.

Meanwhile, U.S. intelligence officials told The Washington Post in a June 30 report that North Korea had plans to deceive the United States about the true number of nuclear warheads and the existence of undisclosed nuclear facilities—indicating that it does not intend to fully denuclearize.