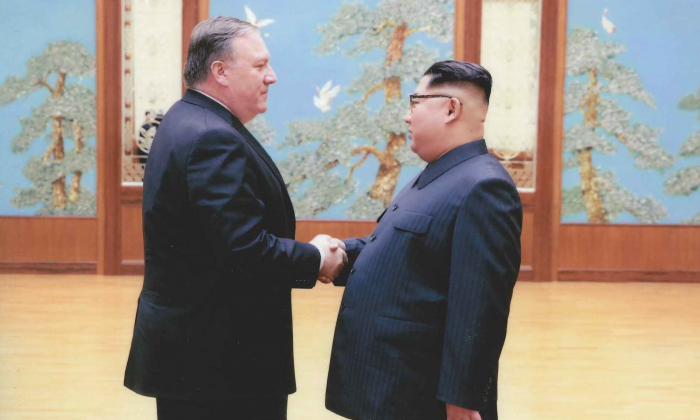 Secretary of State Mike Pompeo said on Friday that the United States is ready to help North Korea achieve prosperity if the communist regime permanently and verifiably gives up nuclear weapons.

“If Chairman Kim chooses the right path, there is a future brimming with peace and prosperity for North Korea and the North Korean people,” Pompeo said. “America’s track record of support for the Korean people is second to none.”

Pompeo traveled to North Korea for the second time this week and returned early on Thursday morning with three American citizens freed from prison in North Korea.

The leaders of South Korea and North Korea met last month and agreed on the goals of peace and complete denuclearization of the Korean peninsula.

President Donald Trump is scheduled to meet with Kim Jong Un on June 12 in Singapore. The president said this week that achieving denuclearization of the Korean Peninsula will be his proudest achievement to date, if all goes according to plan.

“If North Korea takes bold action to quickly denuclearize, the United States is prepared to work with North Korea to achieve prosperity on par with our South Korean friends,” Pompeo said.

During a speech in South Korea last year, Trump placed a spotlight on the stark difference between the economic well-being of the neighboring nations. The vast majority of North Koreans are destitute, while most South Koreans enjoy the comforts and prosperity of a thriving economy and culture.

“The Korean miracle extends exactly as far as the armies of free nations advanced in 1953—24 miles to the north,” Trump said, referring to the border between the two nations. “There, it stops; it all comes to an end. Dead stop. The flourishing ends and the prison state of North Korea sadly begins.”

“Workers in North Korea labor grueling hours in unbearable conditions for almost no pay,” Trump added. “Recently, the entire working population was ordered to work for 70 days straight, or else pay for a day of rest.”

Pompeo first met with Kim when he was still the director of the CIA and days before his confirmation as Secretary of State.

While Pompeo’s was away on his second visit to Pyongyang this week, Trump announced America’s withdrawal from the Iran deal. The New York Times published an article critical of Pompeo’s absence at the Iran announcement. Trump later slammed the newspaper after Pompeo’s trip to North Korea and the recovery of the American detainees became public.