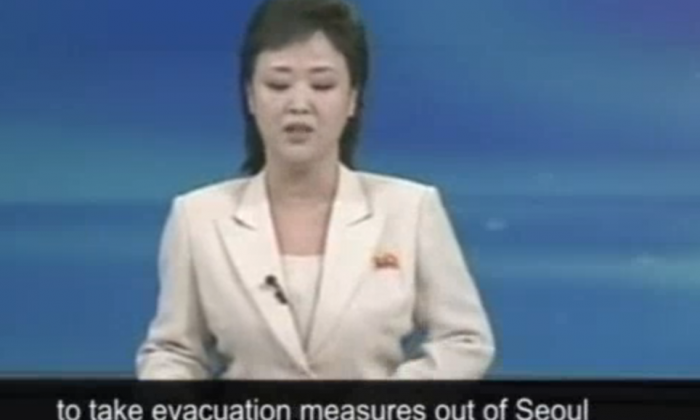 This screenshot of a Guardian video shows South Korean news media reading a statement issued by North Korea’s Asia-Pacific Peace Committee urging all foreigners in South Korea to evacuate to ensure their safety. (Screenshot by The Epoch Times)
Asia & Pacific

“The committee informs all foreign institutions and enterprises and foreigners including tourists in Seoul and all other parts of South Korea that they are requested to take measures for shelter and evacuation in advance for their safety,” the KAPPC’s English dispatch said according to the South Korean Newspaper Yonhap.

This came after Pyongyang announced the closure of the Kaesong Industrial Complex April 8.  The complex, located just north of the demilitarized zone between North and South Korea, was the last standing symbol of inter-Korean cooperation.

None of the 53,000 North Korean workers employed by Kaesong firms arrived at work Tuesday morning.

A group of managers from South Korean firms issued a statement asking the governments of North and South Korea to find a solution and re-open the complex.

Some South Korean authorities view North Korea’s recent spate of threats and hostile actions as a strategy to raise tension in the region in order to win concessions.

“Fueling tension has been a trademark tactic employed for decades by the North to deal with outside pressure against its bad behavior and win concessions,” a South Korean government official who declined to be identified told Yonhap.

The United States is taking North Korean threats seriously. Adm. Samuel Locklear, commander of U.S. Pacific Command, told a Senate committee Tuesday that North Korea represents a clear and direct threat to the United States and its allies in the region.

Locklear says North Korea is keeping a large percentage of its combat forces along the demilitarized zone with South Korea, a position that allows North Korea to threaten U.S. and South Korean civilian and military personnel.