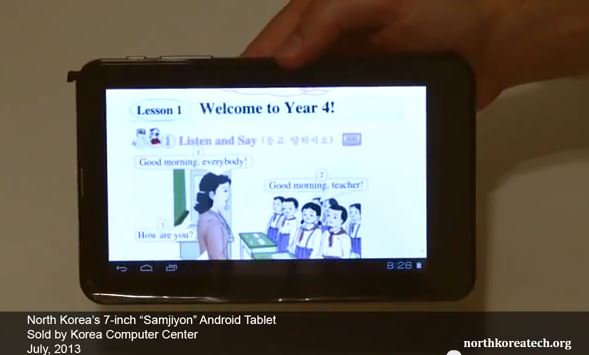 The North Korean tablet is somewhat similar to an iPad, and includes the ability to access television channels and radio, as well as a selection of foreign e-books.

Unlike an iPad, there appears to be no way to connect to the Internet, writes Ruediger Frank of 38North (pdf) in a review of the tablet.

People can connect to the communist country’s intranet (a heavily censored, internal version of the Internet) with the tablet.

The lack of connection to the Internet does have a positive side, as “the number and quality of the pre-installed applications is remarkable and reflects the peculiarity of the market for this product,” reports Frank. For example, the tablet he bought contains 488 pre-installed dictionaries, reference works, and e-books.

Additionally, the tablet comes with a range of games, such as billiards, Basketball Shot, and Fishing Joy, and tools such as Word, Excel, and a camera.

And books include propaganda literature as well as 13 works by foreign authors, including Les Miserables by Victor Hugo;Gone with the Wind by Margeret Mitchell; and Dombey and Son by Charles Dickens.

A newer version of the tablet costs just $200, reports Martyn Williams of North Korea Tech. The tourist he interviewed, Michael, was easily able to take it outside of the country.

“I can honestly say that the Samjiyon is surprisingly impressive,” Michael said. “In terms of responsiveness and speed, it can almost compete against the leading tablets out there. Tapping and launching apps feels fairly fluid, instantiating the camera is as fast as the world’s leading tablets, and there is no noticeable lag when playing games I’m familiar with, like Angry Birds.”

The blog reported that the tablet is possibly made in China.