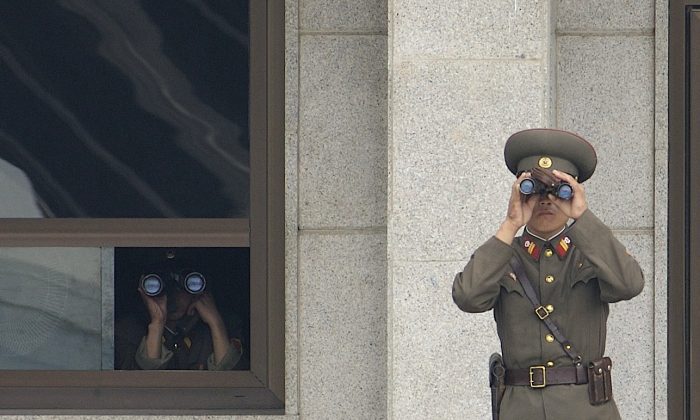 A North Korean soldier has managed to defect to South Korea through the Demilitarized Zone (DMZ) unharmed, just one month after another soldier was seriously wounded for doing so.

The Yonhap News Agency reported that the “low-ranking” soldier emerged out of the fog in front of a guard post at the DMZ just after 8 am local time on Thursday.

After the defection, the Joint Chiefs of Staff (JCS) said that North Korean border guards came up to the military demarcation line apparently searching for the defector.

In response, South Korean soldiers fired about 20 warning shots. This occurred at around 9:30 a.m., said a JCS spokesman.

The spokesman said that about 40 minutes later, some gunshots were heard coming from the North Korean territory, but no bullets were believed to have come across into South Korea, he said.

The news comes after the dramatic defection of a North Korean soldier, 24-year-old Oh Chong Song, who was shot multiple times as he dashed across the border last month. After multiple surgical operations, Oh is said to be in a stable condition.

A day before the most recent defection, South Korean officials said that two North Koreans in a small wooden boat had also defected, reported Yonhap.

“The Navy found it in waters about 100 kilometers north of Dokdo during a patrol mission,” a ministry official said at a press briefing. “A joint probe into the details of their identities is underway.”

The JCS says that 15 North Koreans, including four soldiers, have fled directly to the South this year, versus one soldier and four civilians in 2016, reported Yonhap.

Some 30,000 North Koreans have defected to South Korea mostly through China since the end of the 1950-53 Korean War.