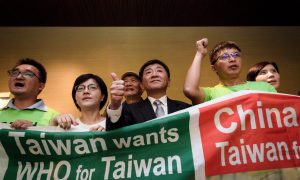 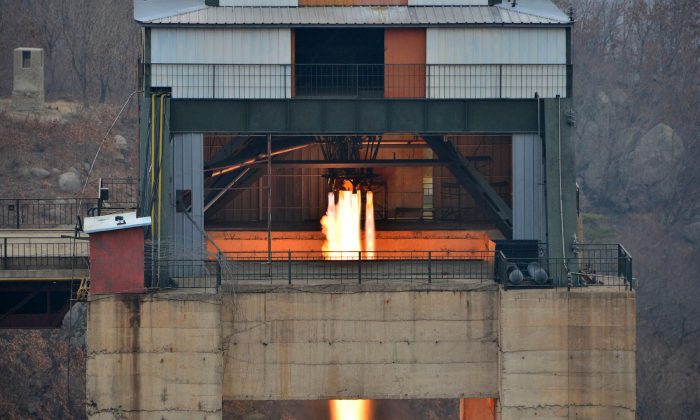 North Korea has two satellites that orbit above America and may hold nuclear bombs, a report recently declassified by the Department of Defense (DOD) warns.

If either satellite holds a nuclear bomb, it could be detonated when above America, cause an electromagnetic pulse (EMP), and break America’s electric grid indefinitely. A full 90 percent of Americans could die.

A wide consensus has emerged that a nuclear EMP poses an existential threat to America. Official reports from the Department of Homeland Security (DHS), a task force from the DOD, and the congressional EMP Commission all agree on this point.

Kim Jong Un agrees. North Korean state media has threatened that it could destroy the United States by detonating a nuclear bomb at “high altitudes for a super-powerful EMP attack.”

North Korean pronouncements even tie their satellites to their nuclear weapons: “The nuclear weapons we possess are, precisely, the country’s sovereignty, right to live, and dignity. Our satellite that cleaves through space is the proud sign that unfolds the future of the most powerful state in the world.”

President Barack Obama didn’t stop or shoot down either of North Korea’s satellites. President Donald Trump inherited the situation from the Obama administration.

It orbits at the optimum altitude for an EMP attack; it’s high enough that the EMP would propagate outward and hit most of the United States, but still low enough to be potent when it reaches earth.

Another unusual feature of the North Korean satellites is that they orbit from south to north. Normally, weather satellites go from north to south to help obtain a sun-synchronous orbit—to observe conditions on earth under regular sun conditions—which can be desirable for earth observation satellites.

The south-to-north trajectory has military applications though, as it evades America’s early warning radars and national missile defenses.

American and South Korean intelligence agencies have communicated little to no concern about the North Korean satellites. South Korea assessed that the Kwangmyŏngsŏng-4 satellite was merely a cover for developing intercontinental ballistic missiles (ICBMs).

But these intelligence agencies have a poor track record when predicting North Korean capabilities.

For instance, in 2016, the New York Times dismissed concerns about North Korea, stating that experts knew North Korea was “years away” from being able to hit mainland America with an ICBM. One year later, they reported that North Korea had successfully launched an ICBM capable of hitting California.

Congress created the EMP Commission as a bipartisan group of experts who would focus specifically on EMP threats and communicate their findings to Congress and the president.

The EMP Commission felt the North Korean satellites were an extremely significant development. Either one may hold a nuclear bomb, and Obama was wrong to ignore them.

The Obama administration refused to speak with the EMP Commission, despite its repeated attempts to warn about the North Korean satellites.

Acknowledging the threat posed by the satellites is a politically difficult step. It could have precluded Obama’s preferred policy of “strategic patience.”

The EMP Commission hasn’t argued that the North Korean satellites definitely have bombs inside them. Their position has been that the U.S. government simply doesn’t know one way or the other; either satellite, or both satellites, could hold nuclear bombs.

Easier Than an ICBM

Many experts in other fields assume this task would be too technically challenging for North Korea to achieve.

However, a nuclear EMP attack from a satellite is actually easier than hitting a target with a nuclear-armed ICBM.

An ICBM requires complicated guidance technology to hit a specific spot, and re-entry shielding to allow the missile to enter through the atmosphere at high speeds without breaking.

By contrast, a satellite can simply detonate anywhere over the United States, and because the EMP propagates over such a large distance, it would be effective. It also doesn’t have to re-enter the atmosphere because it just detonates while in orbit. Further, a low kilotonnage nuke can still cause a potent EMP.

Fitting a nuke into a satellite is no big obstacle.

Former CIA Director James Woolsey warned that North Korea almost certainly has the technology to make nuclear bombs small and light enough to fit into their satellites (which allegedly weigh around 220 pounds and 440 pounds):

“Miniaturization was no huge obstacle to the United States. According to the ‘Nuclear Weapon Archive’ just a few years after destroying Hiroshima with an A-Bomb weighing 9,700 pounds, the U.S. Army had the T-1, a man-carried atomic landmine weighing 150 pounds.”

The United States long ago developed a nuclear artillery shell, the W48 Enhanced Radiation Warhead, which weighs less than 100 pounds.

Other people assume that the United States government has the technological ability to detect the radioactive signature emanating from nuclear warheads, and thus, can detect whether a satellite holds a nuclear bomb.

However, the basic laws of science impose daunting limits on this possibility.

Before a nuclear bomb detonates, it emits relatively little radiation. For instance, uranium-235 has a half-life of more than 700 million years.

Whatever small amount of gamma rays it emits will dilute as it propagates outward into a greater area. The signal decreases rapidly, as the inverse of distance squared, and passes below the background radiation level, making the signal impossible to detect.

“Nuclear materials and devices can be detected at ranges of a few meters up to a few tens of meters, at most,” concluded a team of experts in their paper, A Primer on the Detection of Nuclear and Radiological Weapons.

To have a chance at detecting gamma rays from the North Korean satellites, the United States would need to place a satellite within meters of their satellite, with the proper detection equipment, and for a long enough time period.

Even then, if North Korea took the precaution of shielding a nuclear warhead, it could still be undetectable.

The mainstream media has also tried to dismiss the North Korean satellites by releasing numerous articles asserting that the satellites themselves are broken.

CNN reported that an anonymous senior U.S. defense official from the Obama administration knew the Kwangmyŏngsŏng-4 was “incapable of functioning in any useful way” because it was tumbling.

However, the fact that a satellite is tumbling does not prove that it is not functioning, according to numerous scientists who provided information for this article.

However, based on the photos of the Kwangmyŏngsŏng satellites, none of those concerns apply. They don’t deploy solar panels that must orient a certain way, and they have no complex sensors that one would expect on earth observation satellites.

To transmit complex information, a satellite needs a high-gain antennae—for instance, a satellite dish—that has to be pointed in the right direction.

But the Kwangmyŏngsŏng satellites appear to have low-gain antennas. These are not suitable for transmission of complicated data, but they can receive a simple message, even when tumbling.

Reuters implied that the Kwangmyŏngsŏng-4 was broken because it allegedly hasn’t transmitted data back to earth.

Former NASA scientist Jonathan Nowacki looked at a photo of the Kwangmyŏngsŏng-4 and stated:

“That is exactly how I’d build an EMP satellite: rectangle shaped, solar panels on all sides, simple antennas on the ends. Nuclear bombs are egg-shaped, so you put the egg in a rectangle. Solar panels on all sides means it always has power. That’s not a weather satellite. It has no large sensors. Also, notice a trend in their satellite names? They all translate to mean ‘Bright Star.’ What is a thermonuclear reaction? A small star. It’s like they aren’t even trying to hide it.”

Notwithstanding the clear science on the matter, some continue to deny the threat.

NPR held a segment on this issue, where they introduced Jeffrey Lewis as a “nuclear weapons expert” and asked him to fact-check whether North Korea could detonate a nuclear bomb in a satellite causing a damaging EMP. Lewis burst into loud, extended laughter, and exclaimed the idea was preposterous. However, he gave no reason or evidence to back himself up.

Lewis holds a degree in political science and a doctorate in policy studies.

He did not respond to repeated requests to clarify his position for this article.

The EMP Commission consisted of a bipartisan team of experts that cut across fields, from NASA scientists, to doctorate-level engineers, to experts in nuclear weapon design. They have consistently warned that North Korea’s satellites may be functional and hold nuclear bombs.

However, the U.S. government has not addressed the situation. The threat posed by North Korean satellites falls into a netherworld where no government agency has taken responsibility.

The concept of a nuclear EMP attack is new to humanity and proving difficult for the U.S. government to adapt to. Ironically, it is most dangerous to the United States precisely because it is uniquely advanced and dependent on electronics.

A number of government entities were asked to comment on their posture towards the satellites for this article. The DOD, DHS, and various members of Congress on the House Armed Service Committee declined to comment.

The American Nuclear Society expressed concern that this topic was not aligned with peaceful uses of nuclear science and referred me to Los Alamos, which didn’t respond.

NORAD referred me to U.S. Strategic Command, which was the only entity willing to comment. They ostensibly think the North Korean satellites are actually weather satellites:

“While we track all space activity, we cannot speak on intelligence matters. We would refer you to the North Korean government for the details and characterization of their orbiting satellites.”

It’s to be expected that defense and intelligence agencies will be cagey about a sensitive matter, but in this case, the issue seemed to be a reluctance to recognize an explosive problem. Many were ignorant that the issue exists.

This echoes concerns raised by people from the EMP Commission that government agencies have refused to assume responsibility for protecting the United States from EMP attacks.

“The federal government is disaggregated and dysfunctional in its feeble efforts to counter this existential threat,” wrote Ambassador Henry Cooper, who served under President Ronald Reagan, was director of the Strategic Defense Initiative under President George H.W. Bush, and has a doctorate in mechanical engineering.

Cooper explained that the DOD was a logical choice to protect Americans from EMP attacks because they have proven expertise, from decades ago, up through recently when the DOD spent almost a billion dollars to further harden DOD installations inside Cheyenne Mountain against EMP.

However, the DOD has assumed only a supporting role to the DHS in protecting American civilians from EMP. Meanwhile, the DHS eschews such responsibility, refusing to prioritize it.

Even though the DHS released a report affirming their belief that EMP attacks threaten America, their response was to call for further study of the problem, with virtually no concrete action.

No agency has yet taken the initiative to protect against this acknowledged threat.

The only agency that specialized in EMP preparedness was the bipartisan EMP Commission. It contained scientific expertise accumulated over the course of decades, including the chairman, Dr. William Graham, who was actually at the nuclear Starfish Prime test in 1962, and among the team of scientists who discovered the EMP phenomenon.

Congress established the EMP Commission for the purpose of making actionable recommendations, which would then be implemented. However, Congress has not implemented their suggestions.

In 2017, coincident to Kim threatening the United States with EMP attacks, Congress ended the EMP Commission.