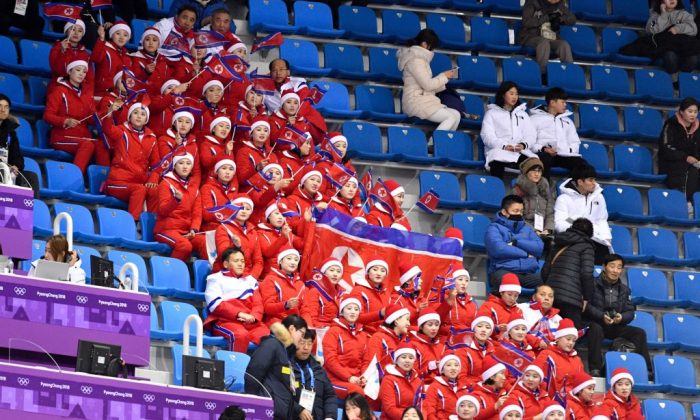 A member of North Korea’s tightly monitored official cheerleading squad was seen cheering for American competitors before another cheerleader quickly warned her to stop.

According to the Daily Mail, the incident occurred during the pair skating event at the PyeongChang Olympics on Feb. 15. The North Korean cheerleading team occupied several rows at the rink, all dressed in matching outfits.

At first, the cheerleaders can be seen cheering wildly for the North Korean competitors. But when Americans Alexa Scimeca Knierim and Chris Knierim emerged, the cheerleaders look stony—except for one cheerleader sitting towards the edge of the group claps until an associate beside her gives her an elbow and a look.

Kim Gyeong-sung, the South Korean head of the Inter-Korean Athletic Exchange Association, said that the cheerleaders are mostly women in their early- to mid-20s who are “chosen on the basis of appearance and ideology,” reported The Korea Times.

A former member of North Korea’s cheerleading squad who defected to South Korea told CNN that cheerleaders are closely watched. They are taught to ignore members of the media and avoid eye contact. All of them are monitored day and night by North Korean agents.

Clapping for American competitors is a big deal for a North Korean. Its not clear if she intentionally sought to clap for the Americans or if it was a mistake.

“You do realise that posting this will probably result in her getting executed when she returns to North Korea,” wrote a Daily Mail reader in London in a comment on the article.

“Probably the first time in her life she was able to truly enjoy life. Not [sic] that the news made a world media event about it it will be her last,” wrote a person in Phoenix, commenting on the same article.

“No it wasn’t an accident it’s called an emotion and she should have the right to do that. So it’s no accident. One can’t help her country is communist,” wrote a reader in Honolulu.