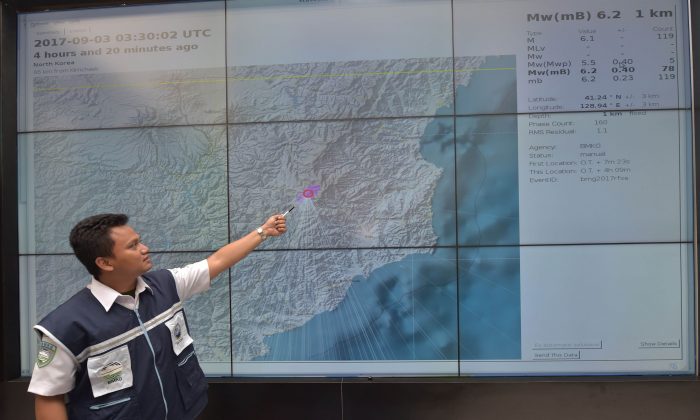 An Indonesian official at Indonesia's Meterological, Climatological and Geophysical Agency (BMKG) points to a map of North Korea showing where the agency recorded a magnitude-6.2 earthquake caused by a North Korean nuclear test on Sept. 3, 2017. (Adek Berry/AFP/Getty Images)
Asia & Pacific

Experts said the North Korean mountain used for nuclear tests appears to have suffered too much geological damage.

Researchers said the mountain’s future is questionable. The last nuclear test made the mountain visibly shift. In the worst case scenario the mountain peak would collapse and release radiation into the air through the hole that remained. They don’t know if it can sustain further nuclear tests.

“We call it ‘taking the roof off.’ If the mountain collapses and the hole is exposed, it will let out many bad things,” said a Chinese nuclear researcher Wang Naiyan, via South China Morning Post.

.@SebGorka: "The fact is North Korea is… a puppet regime of China." pic.twitter.com/scmAWPv9Du

North Korea’s last nuclear test resulted in a magnitude-6.3 earthquake that also shook parts of China and Russia. Smaller earthquakes followed. Scientists have growing fears that there could be earthquakes that rock the entire Korean Peninsula as testing continues, according to The Telegraph. Last year South Korea experienced a magnitude-5.8 quake.

Increased nuclear testing during the Cold War led to increased seismic activity in the Soviet Union and the United States. The more powerful nuclear weapons currently available seem to have an even greater impact on destabilizing the environment, but the regime in North Korea shows no signs of slowing down its nuclear program.

Reports have surfaced online that continued nuclear testing could trigger a nearby volcano to erupt. Mount Paektu sits along the border between China and North Korea and hasn’t experienced significant activity since 1903, but it is an active volcano.

Colin Wilson, professor of volcanology at Victoria University of Wellington, New Zealand, doesn’t think there is much cause for alarm. He gives the example of Japan’s Tohoku earthquake, the magnitude-9.1 earthquake that caused a devastating tsunami to hit Japan’s coast. He cites that no volcanoes erupted as a result of that disaster, he said via the Washington Post.

Website 38 North, a site that analyzes satellite imagery from North Korea, mentioned that despite the severe damage, North Korea will not necessarily stop using the mountain for nuclear testing purposes.