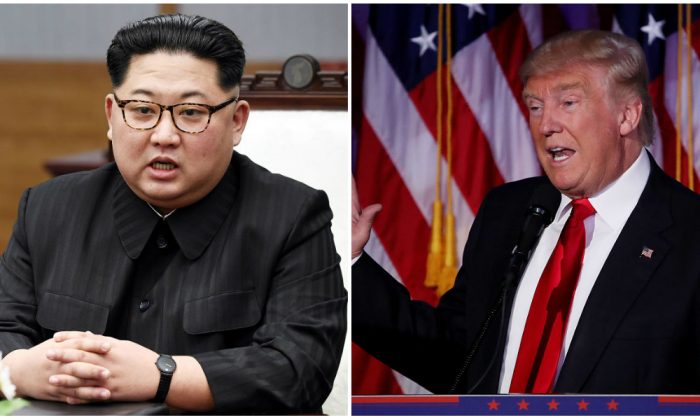 With less than a month before the historic summit between U.S. President Donald Trump and North Korean leader Kim Jong Un in Singapore on June 12, negotiations are underway to decide how the North Korean regime will dismantle its nuclear arsenal.

Meanwhile, the Chinese regime—North Korea’s communist ally—has been eager to exert itself into U.S.-North Korea talks.

On May 14, South Korean media spotted a North Korean delegation arriving in Beijing. Two officials—Ryu Myong Son, department director of the Central Committee of the ruling Workers’ Party of Korea, and Kim Nung O, head of the Party’s North Pyongan Central Committee—were among the group. The envoys aimed to discuss cooperation between the two regimes during the upcoming Trump-Kim summit.

While it was unclear who else was in the delegation, the group was welcomed by Ji Jae Ryong, the North Korean ambassador to China, at the airport, according to Japanese broadcaster NHK.

North Korean Distrust of US

The news of another China-North Korea powwow came just as Japanese media reported that North Korea expressed a lack of trust in the United States when Kim visited Beijing for a meeting with Chinese leader Xi Jinping on May 7 and 8.

“Even though the U.S. has said that it will provide economic assistance if North Korea achieves denuclearization, the promise by the U.S. cannot be trusted,” Kim reportedly said to Xi, according to Japanese newspaper Yomiuri Shimbun on May 13, citing unnamed diplomatic resources.

So far, North Korea and the United States have expressed different views on the steps and timetable for dismantling the regime’s nuclear arsenal. According to Japanese newspaper Asahi Shimbun, the North has resisted a request by the United States to relocate thousands of North Korean nuclear engineers—a move to assure the North cannot restart nuclear development in the future.

While the United States wishes that dismantlement be done within months or up to two years, the North wants a longer period of time to carry out denuclearization.

Additionally, an agreement has yet to be made for what economic package the North Korean regime would receive in exchange for nuclear disarmament.

The Yomiuri Shimbun report also noted that during Kim’s visit, he had asked Xi for some form of economic assistance during the intermediate phase of disarmament, should his regime and the United States come to an agreement.

The Chinese regime has long been North Korea’s biggest trading partner, providing food, energy resources, and other supplies to the North.

However, on May 13, U.S. national security advisor John Bolton made the U.S. stance clear when he said no benefits would flow to the North Korean regime unless a denuclearization process was “completely underway that’s irreversible.”

After decades of failed diplomacy to negotiate on North Korean disarmament, some analysts are skeptical about what can be achieved at the upcoming summit in Singapore. One of those skeptics is Thae Yong-ho, North Korea’s former deputy ambassador to the United Kingdom, who defected to South Korea with his family in 2016.

“That miracle won’t happen,” said Thae, who spoke on May 14 during a press conference about the release of his autobiography, “The Secret Code of the Three-Story Secretariat Office: Thae Yong-ho’s Testimony,” in the South Korean capital of Seoul, reported Korea JoongAng Daily.

He explained that Kim wouldn’t agree to complete, verifiable, and irreversible denuclearization (CVID) because that would mean unlimited inspection from international agencies. Doing so would strike “a critical blow to the core foundation of the North Korean power structure,” he said.

He added, “I think the most realistic solution would be to have the North agree to reducing its nuclear threat.”

So the likely scenario would be, according to Thae, Pyongyang would agree to SVID instead—sufficient, verifiable, and irreversible denuclearization—by downsizing its nuclear stockpile.