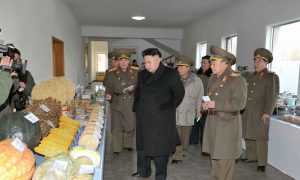 UNITED NATIONS— A U.S.-organized event on North Korea’s human rights briefly turned into chaos at the U.N. Thursday as North Korean diplomats insisted on reading a statement, amid shouts from defectors, and then stormed out.

The U.S. ambassador to the U.N., Samantha Power, tried to quiet the North Korean diplomats at the event that featured more than 20 defectors.

The North Korean diplomats did not comment as they left the chamber after reading out a statement in protest of the event, even as North Korean defectors stood and shouted in their faces.

Nuclear-armed North Korea has been on the defensive ever since a groundbreaking U.N. commission of inquiry detailed vast rights abuses there. International pressure behind last year’s report led the U.N. Security Council to place the issue on its agenda of matters of international peace and security.

Defectors stood up and shouted in Korean as Power and others called for calm and a U.N. security team assembled.

An observer who speaks Korean said the shouts included “Shut up!” ”Free North Korea!” ”Down with Kim Jong Un!” and “Even animals know to wait their turn.”

“There is no need for a microphone,” Power said as one North Korean diplomat persisted in reading out a statement that referred to “ungrounded allegations” and “hostile policy” toward his country. A microphone was briefly turned on for the diplomats.

As soon as the next featured defector, Jay Jo, started speaking, the North Korean diplomats stood and walked out.

But after the uproar, South Korean Ambassador Oh Joon told the crowd that “we thought there was a glimmer of hope … but the delegation of the DPRK today disappointed us. I think it’s a pity.” He was referring to the country’s official name, the “Democratic People’s Republic of Korea.”