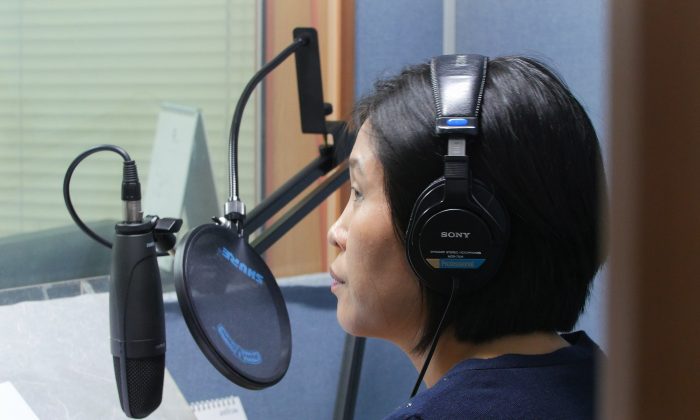 North Korean defector Park Kyung-hwa who works for a Seoul-based shortwave radio station targeting audience in North Korea, demonstrates how she records her broadcast at a church in Seoul, South Korea, on Aug. 25, 2016. Park, who fled the North in 2000 before being sold to a Chinese man, said she saw brokers grope other trafficked women many times. She said brokers kicked and beat her with wooden clubs for about 20 minutes when her first attempt to escape failed. (AP Photo/Jungho Choi)
Asia & Pacific

SEOUL, South Korea—North Korean defectors who became brides for rural Chinese men, they faced another excruciating choice when they suffered abuse: to flee to South Korea and leave their children. Women who’ve made that choice have lived with the guilt and shame for years, but some are breaking their silence and trying to get international help for their situation. What some of the women told The Associated Press about their experiences:

Kim Jungah, 40, chose to be trafficked because she could no longer endure poverty and malnutrition in the North.

“I thought about killing myself many times but it wasn’t easy to do it. For me, escaping from North Korea was the only way to survive,” she said.

Before she was sold to a farmer in the northeastern Chinese city of Shenyang who paid 20,000 yuan ($2,990), Kim said potential buyers visited her and that brokers ordered her to stand up, turn around and show her profile.

“I felt so bad about that. I felt so humiliated and I realized they didn’t see me as human being,” she said.

Kim said she was pregnant when brokers sold her to the Shenyang man, who eventually adopted her daughter.

“There aren’t any mother and daughter who are separated like us. I’m demanding a simple thing. I’m demanding the parental rights that that every couple in the world has,” she said.

Kim, 35, asked to be identified only by her surname. She allowed a stranger in China to marry her off with one of his friends, 14 years her senior, without knowing it was meant to clear the man’s debt.

“When I first saw him (my husband), he really looked like a grandpa. He was like a country man who didn’t care about his appearance at all … How can a man in his 30s look like a grandpa? I thought he was lying about his age,” she said. “I felt really bad and cried.”

She said her husband beat her about once a month and looked down on her so much.

“He always told me he brought a beggar-like person to his house … and threatened to report me to police to get me punished,” she said. “Do you know how intimidating that threat was to me?”

Park Kyung-hwa, 44, offered herself to traffickers but escaped before being sold to a Chinese man.

“I had just prayed for meeting a good husband,” she said. “The women sold as brides were the people who belonged to the lowest class in the North. Our dreams were like eating rice fully and we had heard that even dogs and animals in China ate rice,” she said.

Park said she and six other women were on the back of a big truck loaded with logs for about 12 hours when brokers were moving them.

“If one log fell, we would have died all … We all cried. It was miserable … We held each other’s’ hands and sang together,” she said.

Chae Okhee, 48, lived in China for about 16 years. She wasn’t a trafficking victim but has many friends and relative living in Seoul who had been sold as brides to Chinese men before their arrivals to South Korea.

“One of my friends told me her Chinese husband had put her leg in the shackles to prevent her from going out,” Chae said.

She said her 25-year-old niece from North Korea had also lived with a Chinese man with “a little bit of autism” before she fled to South Korea in 2014.

“She said she wasn’t beaten by her husband but she ran away wearing only underwear in the middle of night in collaboration with brokers,” Chae said. “She came here because she didn’t want to live with him.”