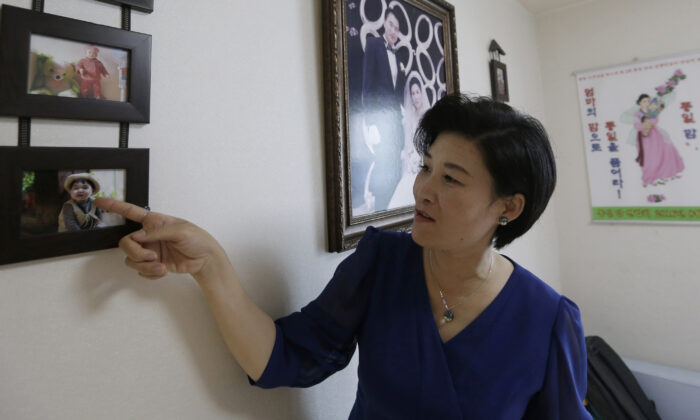 North Korean defector Kim Jungah points to a photo of her son left behind in China, during an interview at her house in Gunpo, South Korea, on Sept. 4, 2016. (AP Photo/Ahn Young-joon)
Asia & Pacific

SEOUL, South Korea—After fleeing North Korea to avoid extreme poverty and oppression, the young woman allowed a stranger to arrange a marriage for her with a rural Chinese farmer because she had nowhere to go. An even more painful decision came later.

She said severe abuse by her husband, including once being tied to a post, and the constant fear police would send her back to the North to face torture and prison convinced her that she needed to flee to South Korea. She decided she had to make the risky journey alone, leaving behind the young daughter she had with her Chinese husband.

“My heart has been torn apart,” the 35-year-old said of the daughter she left in the northeastern Chinese town of Longjing nearly 10 years ago, when the girl was 4. “I heard from my Chinese husband that my daughter cried herself to sleep and searched for me until she turned 8.”

She asked to be identified only by her surname, Kim, out of fear that publicity about her past would destroy her life in the South, where she has remarried and has two other children.

Kim has lost touch with her daughter and is afraid to return to China, but neither she nor other defectors in similar situations have given up. Deep shame and guilt about not seeing their children and worry about social stigma in the South kept them silent for years, but some have begun pushing publicly for international help to get back their children. Four defectors plan to travel to the United States next month to seek help from U.S. and United Nations officials.

It will not be easy.

Experts say Chinese authorities aren’t likely to accept the appeals because the women were illegal residents and their relationships were not legally recognized marriages. Their efforts to reunite with their children could be viewed as individual family problems, rather than human-rights issues requiring international intervention.

“Is there any female defector who had registered their marital status in China?” said Yoon Yeo Sang, a co-founder of the Seoul-based nonprofit Database Center for North Korean Human Rights. “For China, they were the ones who were supposed to be repatriated, and I wonder if China would accept their common-law marital status and take necessary legal steps.”

China’s foreign ministry did not reply to questions about whether it would help the women. The defectors say they deserve international attention because their plight was primarily caused by the North’s abysmal rights conditions and by China’s policy of repatriating North Korean defectors who are caught hiding in the country.

“There are South Korean laws, Chinese laws and North Korean laws, but none of them can help us,” said Kim Jungah, 40, a North Korean defector living in the South who was separated from her child in China. Now an activist, she will lead three other women on a trip to Washington and New York from Oct. 8-18.

The 35–year-old Kim from Longjing had initially planned to go the United States as well but said she cancelled due to worries about the publicity.

The market for selling North Korean women into marriage in China heated up after the North suffered a devastating famine in the mid-1990s that’s thought to have killed hundreds of thousands. China has significantly fewer women than men, and the imbalance is particularly acute in rural farming areas because young women often migrate to big cities seeking better economic opportunities.

In the early years of bride trafficking, most North Korean women were lured by brokers who promised food and jobs in China; some were abducted. But later on, many have volunteered to be sold as brides because they lacked money to sneak across the border and believed living with Chinese men would decrease the danger of arrest and repatriation, according to Ahn Kyung-soo, a Seoul-based activist who has interviewed many defectors.

Kim — the woman who agreed to be identified only by surname — said she slipped into China on her own and managed to stay at an orchard for a few days in 2002. The orchard’s owner proposed that she marry one of his Chinese friends, 14 years her senior. Kim accepted because she had nowhere else to go. She later found that the orchard owner had essentially sold her to his friend as a way to clear a 6,000 yuan ($900) debt.

After arriving in China, many women are beaten or sexually abused before being sold to husbands.

Park Kyung-hwa, who escaped from her traffickers in 2000, said she saw brokers grope other trafficked women many times. She said brokers kicked and beat her with wooden clubs for about 20 minutes when her first attempt to escape failed.

Young women are sometimes sent to karaoke bars or brothels, or forced to work on adult video chat sites, according to defectors and activists.

Park said brokers tried to sell her twice to bars, although she asked to be sold as a bride. One bar owner in Shenyang examined her and two other North Korean women for 10 minutes before deciding not to buy anyone.

“If I was taller and a little prettier, I think I would have been sold,” said Park, who now works for a Seoul-based shortwave radio station targeting North Koreans. She said she came to South Korea in 2002.

Chinese looking for North Korean brides are often old and less well-off; some are disabled bachelors or widowers who work as farmers or manual laborers in rural villages. Some treat the women well, and even end up moving with their wives to South Korea. The four women traveling to the U.S. next month include one whose husband allowed her and their child to come to South Korea and sent them money.

Other men, however, inflict horrible abuse.

When Kim once returned days after running away, she said, her husband tied her to a wooden post for several hours in the middle of the night. She said she was forced to urinate while standing. Days before she gave birth to their daughter, she said her husband beat her with a broom until she bled from her nose because she fought with his mother.

Many of the women flee their husbands in secret. Some tell them they are going to the South only to make money and will come back. Yet many are terrified of actually returning, out of fear they could be repatriated or even captured by North Korean secret agents.

Kim said she regularly sent money, clothes and other gifts to her husband in China, but he broke off contact several years ago after determining she would never return. In her last phone conversation with her daughter, the child complained about being abandoned.

Kim said life with her two South Korean children has helped her begin to understand the pain her daughter in China must have suffered.

When one of the children was 4 — the same age the child she left behind was when she left — he “became very anxious and made a big fuss whenever I went out or returned home late,” Kim said. “Think about how much more a 4-year-old girl would cry when her mom disappeared suddenly.”