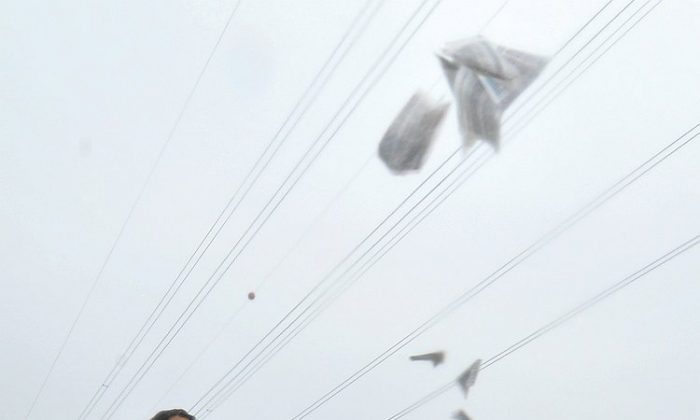 Park Sang Hak, an activist and former defector from North Korea, scatters anti-Pyongyang leaflets on a roadway as police block his planned rally near the tense border in Paju, north of Seoul, on Oct. 22. (Jung Yeon-Je/AFP/Getty Images)
World

It was not the first time that a South Korea-based group sent leaflets over to the North criticizing the country’s repressive regime. This time, however, North Korea sent an unusually strong message that it would take retaliatory action, according to the South Korean Yonhap News Agency.

The Fighters for Free North Korea, made up of North Korean defectors, stood on the western island of Gangwha, South Korea, near the border Monday. They released approximately 120,000 balloons carrying messages to their compatriots—messages North Korea condemned as “psychological warfare and an attempt to topple its communist regime,” according to Yonhap.

The leaflets criticize the communist regime and its human rights record. News in North Korea is censored by the state.

The activists planned to send 200,000 leaflets from Imjin Pavilion on the western Korean border, but were thwarted by South Korean military blockades. The military attempted to stop the activists, hoping to prevent a retaliatory attack from North Korea.

After learning of the proposed balloon drop, North Korea sent a warning to the South Friday, saying it would react with a “merciless military strike” on Imjin Pavilion that “will be put into practice without warning,” according to the Korean Central News Agency, a North Korean state mouthpiece.

North Korea started positioning artillery near the border in the days following the threat, according to the Korea Herald.

South Korean authorities said around 820 residents of three villages near Imjin Pavilion will be evacuated to bomb shelters, according to Airirang television. Air combat patrols were deployed to secure the area in fighter jets.

About 80 activists tried unsuccessfully to circumvent a road block about two miles from the pavilion. Only 10 Fighters for Free North Korea deployed the 120,000 balloons from Gangwha Island. The deed done, South Korea maintains an armed front in case North Korea acts on its threat.

“We will completely neutralize the source [of the attack],” South Korea’s Defense Minister Kim Kwan Jin told Airirang. “The first corps is ready to counterattack once military action is taken from the North.”

North and South Korea are still technically at war, even though the Korean War ended in 1953. The two sides only signed a truce, but not a peace treaty.