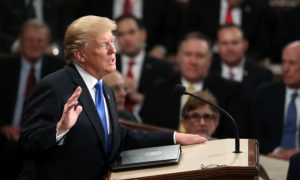 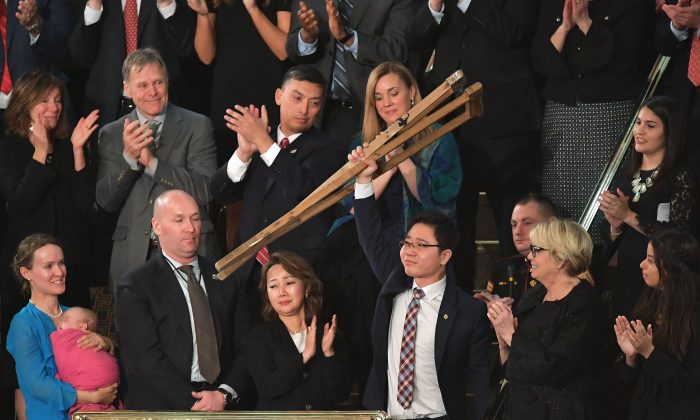 North Korean defector Ji Seong-ho raises his crutches as he is recognized by President Donald Trump during the State of the Union address at the US Capitol in Washington, DC, on Jan. 30, 2018. (MANDEL NGAN/AFP/Getty Images)
Trump Administration

North Korean Defector a Powerful Symbol at State of the Union

WASHINGTON—In a moment of triumph, Ji Seong Ho hoisted his old, wooden crutches high above his head, to the thunderous applause of both sides of Congress during the State of the Union on Jan. 30.

Seong Ho looked every bit the survivor and conqueror, and he has earned it.

President Donald Trump relayed Seong Ho’s incredible story, starting in 1996 when he was a young, starving boy in North Korea.

“One day, he tried to steal coal from a railroad car to barter for a few scraps of food. In the process, he passed out on the train tracks exhausted from hunger. He woke up as a train ran over his limbs. He then endured multiple amputations without anything to dull the pain,” Trump said. Seong Ho lost his left hand and foot.

“His brother and sister gave what little food they had to help him recover, and ate dirt themselves—permanently stunting their own growth,” Trump said.

Later, Seong Ho was tortured by North Korean authorities after returning from a brief visit to China. His tormentors wanted to know if he’d met any Christians—he had.

But Seong Ho’s desire to be free was strong and he travelled thousands of miles on crutches across China and Southeast Asia to freedom.

“Most of his family followed. His father was caught trying to escape, and was tortured to death,” Trump said.

“Today he lives in Seoul, where he rescues other defectors and broadcasts into North Korea what the regime fears the most—the truth.”

Trump warned that North Korea’s “reckless pursuit of nuclear missiles” could very soon threaten America. He said the campaign of applying maximum pressure and sanctions is the best approach.

“Past experience has taught us that complacency and concessions only invite aggression and provocation,” Trump said. “I will not repeat the mistakes of past administrations that got us into this dangerous position.”

Trump also brought the family of Otto Warmbier as guests to the speech. Warmbier died in June last year, just four days after North Korea’s communist regime sent him home in a coma after holding him for 17 months.

Warmbier was traveling with a tour group when he was arrested at the airport as he prepared to depart from North Korea‘s capital, Pyongyang. State media said he stole an item bearing a propaganda slogan from his hotel.

“After a shameful trial the dictatorship sentenced Otto to 15 years of hard labor, before returning him to America last June, horribly injured and on the verge of death,” Trump said. “He passed away just days after his return.”

Trump turned and, through much applause, spoke to Warmbier’s emotional parents, Fred and Cindy Warmbier, and his brother and sister, Austin and Greta.

“You are powerful witnesses to a menace that threatens our world, and your strength inspires us all. Tonight we pledge to honor Otto’s memory with American resolve.”

Trump talked about the depraved nature of the North Korean regime, which oppresses its own citizens more totally and brutally than any other.

“Seong Ho’s story is a testament to the yearning of every human soul to live in freedom,” he said.

“It was that same yearning for freedom that nearly 250 years ago gave birth to a special place called America. It was a small cluster of colonies caught between a great ocean and a vast wilderness. But it was home to an incredible people with a revolutionary idea: that they could rule themselves. That they could chart their own destiny. And that, together, they could light up the world.”