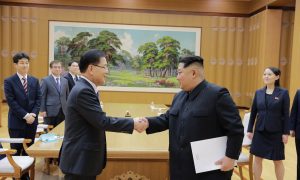 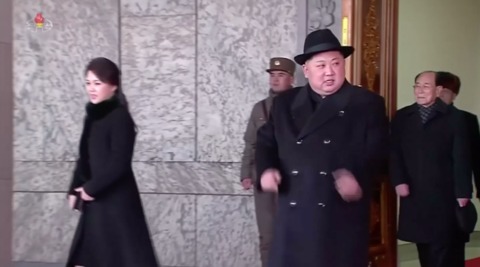 The North Korean communist regime may give up its nuclear weapons, potentially bringing an end to decades of nuclear threats.

The news came out of two days of negotiations on March 5 and 6 in the North Korean capital, Pyongyang, where South Korean envoys met with North Korean dictator Kim Jong Un.

During the meetings, Kim “expressed a willingness to talk to the United States to discuss denuclearization,” according to South Korean media Yonhap News Agency, which cited an official from South Korea’s presidential office.

It says an unnamed official told reporters, “Chairman Kim said that even denuclearization could be among the agenda items for talks between North Korea and the U.S.”

“What drew our attention, in particular, is that he made clear that achieving denuclearization is his father’s dying wish and that it has not been changed at all,” the official said.

The official also added that Kim didn’t ask for anything in return for the dialogue, “but expressed an intent to be treated seriously as a counterpart for talks.”

“The North side clearly affirmed its commitment to the denuclearization of the Korean Peninsula and said it would have no reason to possess nuclear weapons should the safety of its regime be guaranteed and military threats against North Korea removed,” Chung said on March 6, according to Yonhap News Agency.

Chung also noted that North Korea promised to not attack the south. He stated, “In addition, the North promised not to use not only nuclear weapons but also conventional weapons against the South.”

According to Chung, North Korea agreed to hold a summit with South Korea in April. Chung said Kim and Moon agreed to hold their first phone conversation before the third South-North summit.

President Donald Trump marked the event in a tweet on March 6.

“Possible progress being made in talks with North Korea. For the first time in many years, a serious effort is being made by all parties concerned. The World is watching and waiting! May be false hope, but the U.S. is ready to go hard in either direction!”

Possible progress being made in talks with North Korea. For the first time in many years, a serious effort is being made by all parties concerned. The World is watching and waiting! May be false hope, but the U.S. is ready to go hard in either direction!

The talks could mark the beginning of the end for North Korean provocations, which have included threats to use nuclear weapons against the United States, South Korea, Japan, and other countries.

Since taking office, Trump has held a strong stance against Kim’s threats, refusing to back down, and placing sanctions on North Korea, which, in a major shift, China agreed to uphold.

Trump was heavily criticized for his stance on North Korea, and several politicians and legacy news outlets have criticized him with claims it would provoke Kim into nuclear war. The latest developments, however, suggest the opposite.

The Trump administration has expressed its willingness to hold a dialogue with North Korea, yet according to Yonhap News Agency, the White House said it will first wait to see whether North Korea is serious about denuclearization.