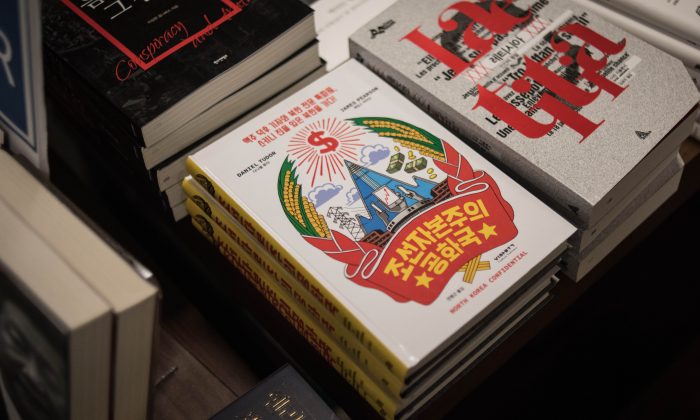 A Korean edition of the book 'North Korea Confidential' is displayed in a bookstore in Seoul on August 31, 2017. (STR/AFP/Getty Images)
International

North Korea’s Central Court has sentenced two South Korean journalists and two media executives to death for reviewing a book about what life in the rogue regime is like.

A court representative said that the book by British authors was originally published in English and later translated into Korean, “insulted the dignity” of North Korea, according to an article in KCNA a North Korea state media.

The article announced that the journalists Son Hyo Rim and Yang Ji Ho who work for separate South Korean newspapers had received a death sentence by the Central Court. Kim Jae Ho and Pang Sang Hun who both serve as director generals of the two titles also received the same sentence, Newsweek reported.

But the Korean-language version of the book published earlier this month translated the title as “Capitalist Republic of Korea” mocking the official name of North Korea—Democratic People’s Republic of Korea (DPRK).

The North Korean court representative did not mention whether the British journalists of the book were going to be punished.

But according to Newsweek, the authors are described by the court representative as “bums who wrote an ignominious jumble of stories told by defector scum” and that “viciously slandered the reality of the DPRK with such sophism that ‘life of the North’s citizens is capitalistic 100 percent.'”

The representative goes on to say that the South Korean journalists who reviewed the book “committed a hideous crime of seriously insulting the dignity of the DPRK with the use of dishonest contents”, Reuters reported.

“Dong-A Ilbo, Chosun Ilbo and other conservative media in South Korea have so far committed smear campaigns against the DPRK nonstop,” KCNA quoted the court as saying. “The criminals hold no right to appeal and the execution will be carried out any moment and at any place without going through any additional procedures.”

The court also demanded that the South Korea government investigate and punish the journalists, according to the state media.

In response, South Korea condemned Pyongyang for its threats, citing freedom of speech. South Korea said it will take appropriate measures to protect its citizens.

“North Korea’s threats in response to journalists’ ordinary acts of reporting constitutes a serious violation of freedom of the press and an intervention in the South’s affairs,” the Ministry of Unification said in a statement quoted in South Korea’s Yonhap News Agency.

“This does not help an improvement in inter-Korean ties at all. We sternly warn that North Korea should end its threat to our nationals.”

The regime’s threatening announcement to execute citizens outside of its own country may be more than just a verbal warning.

Earlier this year the leader of the rogue state Kim Jong Un was believed to be behind the murder of his estranged half-brother Kim Jong Nam, who died at Kuala Lumpur International Airport on Feb. 13.

Siti Aisyah, of Indonesia, and Doan Thi Huong, of Vietnam, were allegedly accused of smearing a liquid across Kim Jong Nam’s face while he waited for a flight. The women claim they were tricked into thinking they were playing a harmless prank for a hidden camera show, Fox News reported.

The liquid was later revealed to be a banned nerve agent that authorities said killed Kim Jong Nam within just “15-20 minutes.”