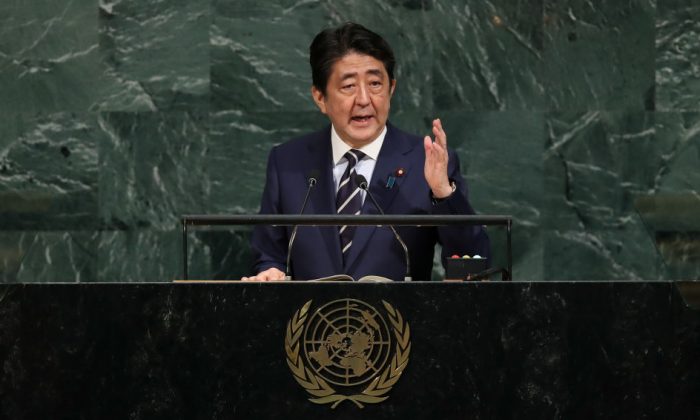 The threats were released via North Korea’s state-run media Korean Central News Agency. The comments are in response to Japan Prime Minister Shinzo Abe’s speech at the UN General Assembly on Sept. 20, over a week after the U.N. approved a new round of sanctions on North Korea, Daily Mail reported.

“We must make North Korea abandon all nuclear and ballistic missile programs in a complete, verifiable and irreversible manner. What is needed to do that is not dialogue, but pressure,” said Abe at the meeting.

When #ShinzoAbe levied sanctions in solidarity w/ @POTUS #Trump, He revealed the Respect he has 4 #Trump's Pol & Biz acumen!#MAGA pic.twitter.com/BxlIEzle4v

Japan’s remarks at the meeting were meant to persuade the international body not to take the North Korea nuclear threat lightly. He emphasized how all previous negotiations and appeasement processes between the communist regime and the international community have not resulted in any cessation of North Korea’s weapons development.

“From the start. North Korea had never intended to abandon its nuclear ambitions.” Abe continued, “Over the course of more than a decade beginning in 1994, the international community continued its efforts towards dialogue with North Korea with great perseverance, first through the Agreed Framework, and later through the Six-Party Talks. However,what we had to learn is that during the time this dialogue continued, North Korea had no intention whatsoever of abandoning its nuclear or missile development. For North Korea, dialogue was instead the best means of deceiving us and buying time.”

He mentioned the increased threat that North Korea’s claim of testing hydrogen bombs presents, and how a new approach is needed.

“This recent crisis is of an altogether different dimension qualitatively than those we have eluded every time some dictator has attempted to acquire weapons of mass destruction. North Korea’s nuclear weapons either already are, or are on the verge of becoming, hydrogen bombs,” said Abe. “Over the more than 20 years since the end of the Cold War, where and when else, and to what dictators, have we allowed such self-indulgence? As it turns out, it is only towards North Korea that this has been allowed.”

Despite two recent ballistic missiles that were shot over Japan, Japan’s minister of defense said he would not shoot down a North Korean missile shot into the air for a test unless it presented a direct threat to Japanese territory. The official said he would also consider shooting down a missile if it was targeted at an ally of Japan, Fortune reported.

North Korea’s response refers to Prime Minister Abe as a “headless chicken” and threatens to make Japan “the first victim of nuclear disaster in the world.”